Who doesn’t like a walk or a hike in the Lake District? Whether you’re up for a winter adventure or planning a hike next year, this spectacular scratch print is just what you’re looking for. Maps International is a cartography and map making company based in Oxford, and they have made a stunning ‘hill-bagging’ map of the Wainwright Hills. The Scratch Off Wainwright Hill-bagging Print is the perfect gift for walkers / hill climbers or indeed, lovers of the Lake District. 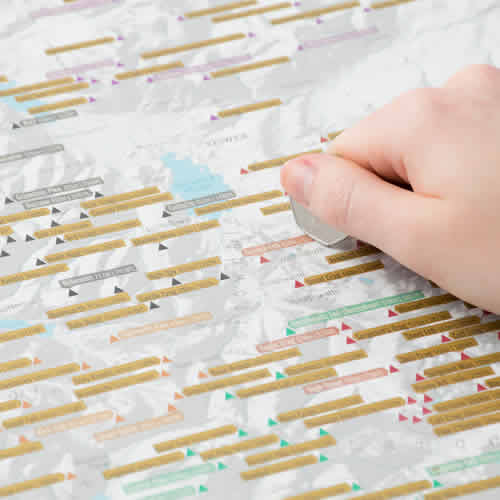 The set of Wainwright Fells were first defined by Alfred Wainwright MBE, who in 1952 began a project to walk the fells, drawing, mapping and describing each one in minute detail. Over 13 years Wainwright mapped 214 fells in 7 iconic guides. Wainwright claimed these guides were originally for his own interest but he went on to publish them.

His choice of which fells to include was down to whether he thought the fell deserved its own attention and section in his guides. As well as the highest mountains such as Scafell Pike and Helvellyn, he also included some very small but prominent fells such as Castle Crag in Borrowdale which is only 290m high! And every one of Wainwrights fells are marked on this map along with the height, the peaks are also colour coded to indicate which of the seven books they are described in.

Available as part of Maps International’s ‘Collect and Scratch’ range of maps, each of the fells are marked with a scratch off latex. This allows you to document each one you have 'bagged' by scratching off the foil to reveal some exciting colours underneath. Also featured on the map is a tally that you can update with a dry wipe pen as you go along so you can see how many more you need to 'bag'.

You can tell that this map has been designed with walkers and climbers in mind, but really anyone who’s interested can use it, regardless of their skill level. At £15, it makes a perfect gift this Christmas. We’ve never really seen any other map out there with the attention to detail, hill-shading and elevation. You can use this map to plan your trips to the outlying or more remote fells such as Grizedale Pike or Carrock Fell to escape the crowds or just to explore parts of the Lake District you have never been before.

There’s a degree of longevity with a map like this. Incredibly there are a couple of elite athletes who have summited all 214 fells in less than 7 days (over 300 miles, two marathons and 5000m climbing every day for a week!) … but for most people ticking off the Wainwrights is a project that will take many years to complete.