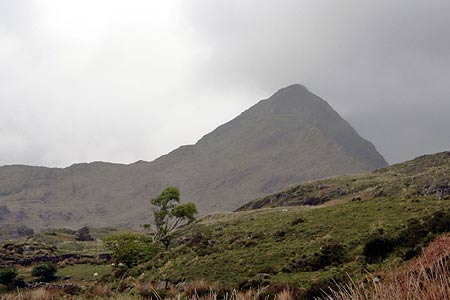 The Moelwyns are not the most popular part of Snowdonia by any stretch of the imagination, but, none the less, they are rugged and beautiful in their own way. This route came about by accident - I had intended a much longer walk but the weather closed in and forced an escape route which turned out to be very interesting. The route starts with the classic South West ridge ascent of Cnicht - the jewel in the Moelwyn crown - and takes in three other summits before returning to Croesor via the eerie old quarries of Cwm Croesor. Navigation is never straightforward in the Moelwyns with very few of the paths marked on the map being visible on the ground and, vice versa, many of the visible paths not being shown on the map. If you are unsure of your navigation skills, this is not the route for you.

The start of this Snowdonia walk is the small car park in Croesor (Grid ref. SH631446). From the car park turn right (NW) along the village road, passing the school and then passing through a couple of gates as the road-cum-track climbs steeply. After approx 550m of walking, as the main track continues ahead NW towards another gate, turn right (NE) on to a less obvious but wide grassy path. You will now see ahead of you the South West ridge of Cnicht which gives rise to the peak often being referred to as Wales' Matterhorn. About 700m after turning on to this path, you will see a small wooden post with a faded yellow square attached. At this point leave the more obvious path that continues NE and descends towards a small stream. Instead turn right (SE) to follow a faint path up a vague valley to a stile across a wall

After crossing the wall, turn left to follow the clear grassy path. As the obvious remains of an old quarry level come in to view ahead, the path crosses the wall then climbs across a rocky area before passing through a gap in the next wall. Now begins the incessantly steep climb up the ridge. Although never difficult to find a way up the craggy shoulder, the gradient makes this a tough climb, all the way to the summit. Throughout this climb there are wonderful views of the rugged Moelwyn mountains and also the spectacular view in to Cwm Croesor on the right.

Although not marked on the OS Maps of the area, there is a very clear, very obvious path heading NE across the summit plateau. At a point between Llyn y Biswail and Llyn Cwm-y-foel the path divides. At the split, take the left hand fork to descend gently towards Llyn yr Adar. When the lake comes in to view, take a moment to look at the way ahead. To the right of the lake you will see a number of obvious grassy paths, none of which feature on the OS map. The paths that are shown on the map heading SE / SSE from the lake are not particularly visible on the ground. Ahead of you and stretching out to the East is a ridge of sorts that includes the highest point of Ysgafell Wen. The easiest route to the summit of Ysgafell Wen is to follow the right most of the grassy paths ahead until reaching a small stream at grid ref. SH660479. From this stream continue ahead on a grid bearing of 055 for 95m. You should then see a faint grassy path leading off to the right (SE) that gradually becomes clearer as it approaches the summit of Ysgafell Wen.

From the rocky summit, return to and cross the fence then follow the visible path alongside the fence until reaching a gate near Llyn Coch. Here the main path is a bog in which you will very quickly sink to thigh deep. Pick your route around the bog and to the next gate. Follow the fence again to the corner and then it is but a short climb to the summit of Moel Druman. Drop ESE from the summit to rejoin the clear path which is followed past two small tarns and one larger one. After the larger tarn, strike off on a grid bearing of 115 for a gentle climb to the summit of Allt-fawr.

It was on the way to the top of Allt-fawr that I saw the nasty looking weather starting to close in and decided to abandon plans for Moel-yr-hydd, Moelwyn Mawr and Moelwyn Bach. The escape route was to drop down from Allt-fawr to the Eastern shores of Llyn Conglog then handrail the lake around to its Southern outflow. After crossing the outflow, walk for 425m on a grid bearing of 250 at which point Llyn Cwm-corsiog should come into view.

Drop down to the South East corner of the lake by the easiest looking route but do not cross the dam wall on the obvious path. Instead, stay to the South (left) of the old fence and handrail by means of the remaining fence posts. As the fence posts start to head more or less due South a visible track appears. Follow this rough track as it veers South East, leading you to the eerie but impressive remains of a quarry below Foel Ddu.

After marvelling at what were obviously tough conditions in which to live and work, follow the old quarry road back to a stile over a fence next to another derelict quarry building. Continue along the old quarry road until it starts to bend round left towards the South West. On the left, across a flat marshy area, a wall comes in to view. Pick a way across the flat area to pick up a path on the left of the wall.

The path drops quite steeply in to Bwlch Rhosydd before levelling out and remaining a clear path throughout the long descent along Cwm Croesor. Although wet in places, the path is basically very sound and never difficult. Throughout the descent along the valley, there are very obvious signs of the bygone quarry industry of the area. Eventually you will arrive at Croesor-fawr (Grid ref. SH639451) at the foot of Moelwyn Bank. Leave the main path here and take the waymarked footpath to the North for 110m to join the main path along the valley bottom back to the car park.

Guidebook describing 30 walks in Snowdonia, Wales. Routes are mostly low level and on clear paths and showcase the region's beautiful scenery and rich history and culture. Part of a 2-volume set, this northern volume includes the Snowdon area, the Ogwen and Conwy Valleys, Betws-y-Coed, Beddgelert, Ffestiniog and the coast.
More information