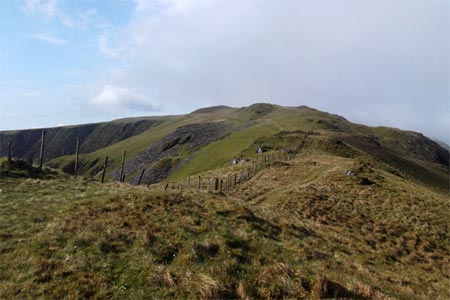 I embarked on this Snowdonia walk in a spirit of duty as part of a long term attempt to climb the top 100 peaks in Wales. Little did I know that it is a truly spectacular gem of a walk that went straight in to my top 3 Welsh walks. The peak of Waun Oer, which is the 87th highest place in Wales, gives views over the whole of Snowdonia, while the ridge that links the two peaks is as exhilarating as anything in the Carnedds, with dizzying drops down sheer precipices viewed from the safety of afar, or at one point, from the edge. The walk is not long at about 11.5 miles (one-car version) or 8.5 miles (two-car version), neither is it difficult, but it is constantly surprising, with unexpected vistas opening up on either side, behind you or down below. I did this on St David's Day 2008, which was cold, windy and bright but ended up with a deluge as I was walking back to my car along the road. The walk along the A470 at the end is the only downside to this expedition, so if you can avoid it by using two cars or a bus, do so. The people who designed this road apparently gave no thought whatsoever to road users on foot.

To implement the two-car option park one car at a convenient spot in the old road, which turns off to the right of the A470 about a mile north of Dinas Mawddwy. (Grid ref. SH848154) Take the other car towards Dolgellau and park it in the car park at the top of the pass (Grid ref. SH802171), which is also where the one-car option starts. Part of the ease of this walk is due to the fact that this car park is already at 363m so you have only 307m to climb to the peak of Waun Oer, not counting the big hole in between. Over the stile and up the hill, route finding is easy: just follow the fence, which runs roughly SW all the way to the top. The quarry at 612m is a straight cut through a rocky outcrop. From here the path levels off for about half a mile, and if visibility is good you will see the triangulation point on Waun Oer straight ahead of you. The path drops down to a pass with a stream. Here you have a choice: hop over the fence in front of you, or hop over the fence to your left and then cross the fence in front by the stile. Going by the stile you will find a steep path that is slightly eroded, which follows the fence all the way to the top. To get to the top itself, you will have to hop over the fence again, but since there was a DIY stile kit in a builder's bag at the top, I suspect that by the time this appears, a more civilised way of getting over the fence will be in place.

Retrace your steps down to the little pass, go over the stile and staying with the fence on your left, climb the hill ahead. The top here is covered with blanket peat bog, and the path follows the ridge around until you are walking in a SE direction, following another fence, which also has to be crossed eventually. To your right you can see the enormous precipice that makes up the west face of Waun Oer, which has been marred by a singularly insensitively sited forest road. Ahead you will see the next two miles of your route, looking like a giant snake undulating across the horizon. From the plateau, still heading SE climb up to Craig Portas (Grid ref. SH802142), and turn left to follow the ridge ENE all the way to Maen Du (Grid ref. SH822152), which is the highest point of the walk, and the 86th highest place in Wales.

From here, you have a choice of routes. If you have any tendency to vertigo, you would be advised to return to Craig Rhiw-erch. This was marked by another DIY stile kit when I did the walk, so will possibly be easily identifiable by a stile in the future. Follow the ridge that stretches out to the SE from here, heading for the corner of the wood, and then turn along the edge of the wood, heading ENE. The more adventurous should carry on from Maen Du following the distinct SE path along the edge of the craig. The path soon swings to the SW, at the point where you first see the astonishing precipice that is Craig Maesglase. This is a vertical tangle of lichen and moss, intercut with waterfalls, and swooping down to the little narrow valley below, where sheep graze, safely oblivious of the dramatic scenery above them. There is one point on the traverse of Craig Maesglase where the path is quite exposed, and needs to be crossed with care, especially when the ground is wet underfoot (as was the case when I did it). From the top of the craig you can see your path ahead, where it passes along the bottom edge of a rectangular patch of woodland on the far side of the valley. To get to it, leave the top of the craig heading directly across the boggy plateau towards the wood ahead. Turn left along the edge of the wood, where you can be reunited with any timorous companions who chose to walk along the higher ridge. The path goes steeply down towards a little pass, and from there down into the valley, along a farm track under the rectangular patch of woodland, and then a road which will lead you back to your first parked car, or to your ordeal by tarmac.

The ordeal by tarmac may be ameliorated by crossing the A470, going a few yards to the right and taking the road that you will find there (Grid ref. SH848154). This leads on to an old drovers' road, which at the cost of opening and closing many gates will take you about half the way back to the car park at the top of the pass. Following on from this, the OS map also shows a footpath on the south side of the A470, which should take you three-quarters of the way. Inclement weather (horizontal rain) made it impractical for me to investigate this, so I just trudged the remaining mile and a bit along the road's edge, at greater risk to life and limb than I experienced on the path at the top of Craig Maesglase.

Inspirational guidebook to 40 great mountain day walks and scrambles in Snowdonia. Inspirational routes for all abilities across the National Park with routes up Snowdon and Moel Eilio, the Glyderau, the Carneddau, Eifionydd, Siabod and the Moelwynion, Rhinogydd (the Harlech Dome), Migneint and the Arans and Cadair Idris and the Tarrens.
More information