Snowdonia Walk
Tops and Tarns of the Moelwyns 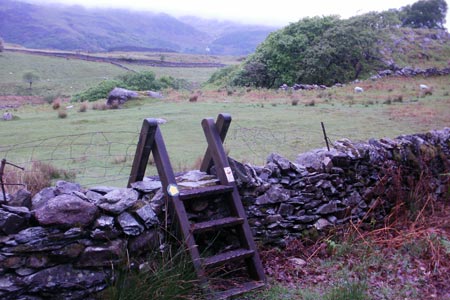 This is a Snowdonia walk with a lot of "box ticking potential" in terms of tops and tarns, especially the latter. However, it is much more realistic to aim to either spread the walk over two days or to be selective with your route choice if only one day is available. To try to cover all the summits and tarns in one day would be a major expedition for which there may well not be enough hours in one day, even during the long hours of daylight in summer. This is without even beginning to consider the trio of Moel yr Hydd, Moelwyn Mawr or Moelwyn Bach - not out of any lack of respect for them, but simply due to the fact that there are not enough hours in a day to include every landmark and with these three being the furthest Moelwyn peaks from the start point, they need to be overlooked on this occasion.

As a look at the Ordnance Survey map of the area covering the Moelwyns shows, there are a large number of tarns that can be included as part of a walk in this area. This is all the more apparent, if you are familiar with somewhere like the Lake District in Cumbria, where to do a walk featuring perhaps three or four tarns in one day would seem a reasonable maximum number for inclusion in one walk. If we count "llynnaus" as individual tarns, and also include the nameless pool near to Llyn Conglog, then this walk includes a total of sixteen tarns or llyns:

Depending on time, energy levels and weather conditions, the walk route could also be extended to include a further three llyns - Llynnau Cerrig y Myllt (two lakes) and Llyn Arddu.

Among hill walkers, Cnicht (2,265 feet) is probably the best known of the Moelwyn peaks due to its "Welsh Matterhorn" image, However, I have drawn blank looks, even among hill walkers in Snowdonia, when I mention "The Moelwyns", even though this range is just south of the Snowdon group across the Nantgwynant valley. Between Cnicht and Moel Siabod lies an area of land where walkers are seldom seen, but which is dotted with llyns (small lakes) along with a few summits that exceed 2,000 feet in height, namely Ysgafell Wen (2,204 feet), Moel Druman (2,218 feet) and Allt Fawr (2,287 feet). Another mountain, Moel Meirch, at 1,991 feet, falls just short of having two thousand feet plus status.

When estimating the overall time that the walk is likely to take, factors to take into account include the actual time taken compared with the intended time to reach certain landmarks on the walk, along with potentially changeable weather conditions, and variations in energy levels. Thus, decisions will need to be made as you go along whether to include or omit certain lakes or summits or to follow a particular course. However, the nature of the terrain allows plenty of flexibility for making such decisions as you go along. This is not a walk to attempt in poor visibility as the terrain would pose route-finding difficulties along with views being blotted out by cloud or mist, which would be a pity.

The walk route begins at the car park at Bethania, the usual starting point for a walk up Snowdon via the Watkin Path. Admittedly, this adds around a mile and a quarter of road walking to the start and finish of the walk, but this is the nearest car park. Take the road to the left which crosses the bridge over the Afon Glaslyn (river). The road leads up to a bend at the top of the hill where you turn off it on to an unsurfaced road which leads to the right to a house, just before which there is a public footpath sign. Following the direction of the sign, the way ahead leads to a wooden stile over a wall. Crossing the stile, a path winds its way up through rocks and then skirts an area of marsh. The path ahead is generally clear, though if visibility is good, the crags that back Llyn Llagi are a useful landmark to follow even if you lose the course of the path where it is less clear. Llyn Llagi does not come into view until you are almost at its shore. The cliffs to the rear of it are a striking feature as is the waterfall to the left which issues down from another llyn, Llyn yr Adar (the Lake of the Birds), which is visited later in the walk.

Next head up the grassy slopes to the north east of Llyn Llagi to join a path which steadily gains height, though following the path is not strictly necessary as the next stretch is pathless anyway in the direction of Llyn Edno which can be glimpsed from a distance. Once the first Dog Lake (the one to the north) comes into view on the right, it is time to head for Llyn Edno to the left (north to north east).

Llyn Edno is one of the most attractive lakes in the Moelwyns and has an appearance reminiscent of some of the lakes of the Rhinogs with its rocky outcrops, heather and bilberry plants. This is one of the places on this walk where there may be a temptation to linger, so any stop here will need to be factored in to the overall estimated walk time. There are fine views of distant mountains including The Glyders, the Snowdon range, Moel Hebog and the Nantlle Ridge though you get much the same view from higher up on Ysgafell Wen. Moel Meirch is the peak to the northwest from Llyn Edno, about half a mile distant, walking over rocky terrain with a certain amount of going down and then up again.

At the outflow of Llyn Edno to the east of the lake, care needs to be taken underfoot due to the amount of wet, boggy ground. The ridge between here and Ysgafell Wen is liable to be like this from time to time. Although Ysgafell Wen has three tops, one top in particular stands out with a cairn on it just to the south of the most easterly of the three Dog Lakes. The Dog Lakes each have a similar size and shape and are sufficiently far apart (about a hundred yards) to merit separate names in my view; however they are collectively known by one name - Llynnau y'r Cwn. The one to the south is the pick of the three in my opinion, especially on a sunny day when it is a deep royal blue colour with the Snowdon range providing a backdrop to a photo.

Llyn yr Adar and Cnicht are in view from the top of Ysgafell Wen to the south west. Next, the route follows a pathless, grassy course south east towards Moel Druman, the next top along the ridge from Ysgafell Wen. Llyn Terfyn, Boundary Lake, is the next "llyn to appear. This small tarn has no apparent outflow and is roughly oval in shape with small crags on one side and a slope dominated by slate stones on the other. Nearby Llyn Coch is noticeably larger and the best photos of it are those that feature a mountain framed in the background - typically Moel Siabod, Cnicht or Moelwyn Mawr. A small tarn with no name comes next before the largest tarn of the Moelwyns, the next lake on the walk, Llyn Conglog, appears at an altitude of 2,001 feet. Its most distinguishing feature is its promontory, a bit like the snout of a giant crocodile, jutting out into the lake. Allt Fawr, another 2,000 foot plus top, is the mountain beyond this lake which is surrounded by grassy land providing easy though pathless walking.

More walking on pathless, grassy terrain follows to the south west, as well as some height loss, as Llyn Cwmorthin and the former slate quarries above Blaenau Ffestiniog appear in the valley way below to the south. Two more Moelwyn lakes, each a former Rhosydd quarry reservoir, can be found by descending the grassy felllside to the south west from Llyn Conglog. The larger of the two, Llyn Cwm-Corsiog is held back by an obvious dam. Llyn Clogwyn Brith is nearby, though the issuing of a waterfall down an incline may give the impression (incorrectly, as it turns out), that this is it. Instead, the origin of the waterfall turns out to be a tiny pool of water, but Llyn Clogwyn Brith is not far away as you round a corner to locate the dam. Having seen it marked as a small, roughly circular blue blob on the Ordnance Survey map, and knowing that it is a former quarry reservoir, I was struck by how pretty this little lake is. It has rocky outcrops to the north and east, and this is yet another of the Moelwyn lakes which forms a good foreground to Cnicht in a photo.

To the west, Llynnau Diffwys is the name given to two lakes in proximity to one another and these are seen next, in the foreground to Cnicht, along more grassy, pathless fellside. The island on one of the lakes tends to make it the more visually appealing of the two. Llyn Cwm-y-Foel, below Cnicht, can be seen below as you gain height towards the col overlooking Llyn yr Adar with no need to lose height, only to have to regain it again. This lake has a huge dam at one end and in May 2011, the water level was low with the tarn offering little in the way of visual appeal.

Bearing in mind that this is mostly a pathless walk, a path does appear on the ascent north west to the top of the rise overlooking Llyn yr Adar. The most notable feature of Llyn yr Adar is its solitary island, a favourite spot for birds which presumably explains its name, the Lake of the Birds. The nearest point to the island is on the north western shore where there are some rock outcrops. A possible slight digression here is to follow the outflow a short way down to look down on Llyn Llagi way below. The beck falls gently down to begin with from here but this is not a recommended walking route, either up or down, indeed it would be stretching the definition of walking, given the steep, rocky terrain.