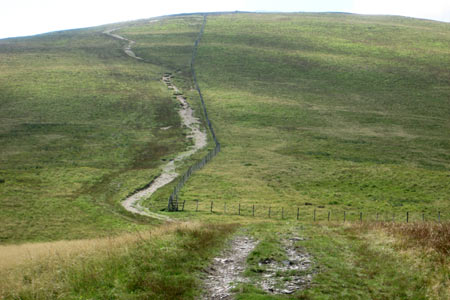 Seen from Snowdon, three miles away to the south east, Moel Eilio and its neighbouring tops appear a bit like diminutive grassy hills such is the greater height and rugged terrain of Snowdonia's highest peak. Appearances however do not tell the whole story and at 726 metres (2382 feet) Moel Eilio is no mere hill. These hills offer a worthy day out in their own right and not just when the higher tops are in cloud, in fact one of the more positive aspects of the horseshoe walk is the views far and wide. The hills of the horseshoe present a number of fairly steep ascents and descents, often on clear tracks and, in turn, there are fine views looking ahead and back as the landscape keeps changing, particularly after leaving the top of Moel Eilio. For those who have already done the higher and better-known peaks in Snowdonia, this is a walk with a novelty factor which on a clear day will reward one's efforts with views of the Carneddau, Glyderau, the Snowdon range, the Nantlle Ridge, Mynydd Mawr and the Moel Hebog hills with views as far out as the sea at Anglesey and you can test your peak-walking knowledge by putting names to the different mountains. When seen from different angles, the Moel Eilio group reveal their rough, steep and craggy sides as well as their broader, gentle grassy sides. Wild ponies may be seen on the hills here and you can expect to see only a handful of other walkers in contrast to the crowds going up and down Snowdon just a few miles away.

This Snowdonia walk starts and ends at Llanberis where there are various car parking options and the Snowdon Sherpa bus runs between here and Betws y Coed.

Follow the road up towards the youth hostel and turn right into Fron Gron, passing the Plas Garnedd Care Centre on the left. The road leads steeply uphill in places, turns sharp.left and continues climbing. The lane becomes an unsurfaced track with views opening out, especially looking back towards Elidir Fawr whose scarred appearance from mining activities shows a very different face from this angle than from the Glyder ridge. When the mountain railway is running up Snowdon, trains are apparent from here making their way up and down - both seen and heard. The lane turns sharp right by Maen-llwyd-uchaf and after another 400 yards turns left again. Moel Eilio, the first and highest peak on the walk, is seen on the left but the path follows a course roughly north-west which appears to be going a little off course until, just before a gate, it switches sharply to the left at Bwlch-y-groes in a more south-westerly/southerly direction. From here you have nearly a mile and half of ascent to Moel Eilio, which is seen ahead as the path steadily gains height, steeper in some places than others. As you gain height the path runs parallel to a fence for the final section to the summit. When the gradient eases off, the broad grassy summit plateau is reached. After the height gain and effort involved, this is a suitable place to stop and take in the all-round views.

Although a wooden stile over a fence appears to lead invitingly onwards, instead, remain this side of the fence and head downhill with the next peak on the horseshoe seen ahead, obviously much lower as height is now rapidly lost on descending the grassy fellside. The route passes over Foel Gron and Foel Goch - one of five mountains of the same name according to Terry Marsh's 1984 book about the summits of Snowdonia. It's the ever-changing views that absorb one's attention as following the route ahead requires little thought. Llyn Dwythwch appears in the cwm below to the left while the Glyderau and Carneddau form the background beyond. The Nantlle Ridge, the Hebog hills and Mynydd Mawr along with their lakes occupy the view to the right. A particularly steep slope leads down to the col before the third and final peak of the walk. At the col, a very good path leads down the valley to the left, a point the walk will return to a little later.

A path leads up the spine of the last peak on the walk, Moel Cynghorion, before levelling out and following the long, broad and grassy top. It's not obvious which the highest point is and one of two points could be higher. Either way, it's the view towards Snowdon to the south which most catches the eye, while the view the other way reveals much of the horseshoe walk completed thus far.

Ordinarily I would not suggest an out and back but it has its merits on this occasion to return to the col below Foel Goch passed earlier. From here an excellent path leads down the valley towards Llanberis. After two miles of easy walking you reach a tarmac lane which is followed back to Llanberis. The route back passes a few dilapidated barns and the Snowdon mountain railway is apparent with trains both seen and heard heading up and down near to the Llanberis route up Snowdon.