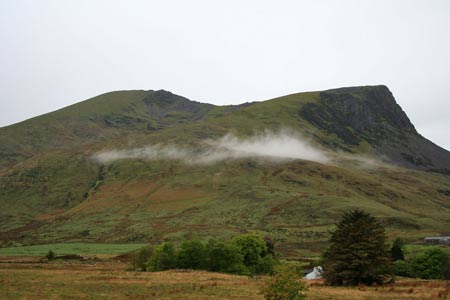 Ask any keen walker to name a famous ridge walk in Snowdonia and chances are that at least 90% will respond with Crib Goch. Sure, Crib Goch is a fantastic and exhilarating route but it is undoubtedly helped by its proximity to Snowdon. Drop down to the West of Snowdon and the village of Rhyd Ddu, and you are at the start of another fantastic Snowdonian ridge walk that, in my opinion, is even better than Crib Goch. Not only that, being located in the quiet Snowdonian backwater of the Eifionydd, the chances are that you will be able to walk the spectacular Nantlle Ridge without seeing another soul all day - we had the ridge to ourselves on a Bank Holiday Monday in May but got back to a full car park. The views on this walk are spectacular so, if you have a choice, a calm clear day should be chosen.

This Snowdonia walk involves a section of scrambling (grade 1 - 2) with a lot of exposure on the ascent of Mynydd Drws-y-Coed. The scrambling is not easily avoided so do not follow this route unless you have a head for heights and are confident scrambling on exposed, steep rock ridges. This is a route best avoided if wet and if windy weather is forecast. There are a number of possible return routes from Mynydd Tal-y-mignedd to Rhyd Ddu. The one described was used when the weather started to close in. It offers the easiest descent route and spectacular views of the Nantlle Ridge from the North but at the expense of a 3.5 km section of road walking.

Cross the road from the car park at Rhyd-Ddu (Grid ref. SH571526) and, after admiring the imposing bulk of Y Garn, pass through a metal kissing gate on to a waymarked footpath across the field. A series of slate slabs have been provided as stepping stones to avoid the worst of the surrounding boggy ground. At the far end of the field, pass through the gate then ignore the private bridge ahead and turn left for 20m to the public footbridge. After crossing the stile the track to the left indicated as a public bridleway on the OS Map is now a private road but an alternative public footpath is provided and indicated by a series of white arrows painted on the rocks.

On emerging at the B4418, turn back left through a gate on to the waymarked path. The route ahead is clear, passing either through 2 gates or over 2 stiles depending on your preference. After the second gate / stile, you are in to the open moorland and the gradient starts to crank up to make a hard climb. The path doesn't exactly follow the route indicated by Ordnance Survey but zig-zags around a bit to ease the gradient a little. When you get level with the rocks of the East ridge the gradient gets very tough. However, taking a breather and looking back at where you've come from will (on a clear day) reveal spectacular views of the Snowdon range.

Once you draw level with the top of the main rocks of the East ridge the gradient eases appreciably for the final push to the summit of Y Garn. There are some rock sections to negotiate but following a distinctive coppery colour series of rocks forms the easiest route. From the cairn atop Y Garn you will be greeted with views across to the coast and Anglesey beyond. Apart from the summit cairn, other ancient burial cairns have been butchered to from wind shelters. From the summit of Y Garn you will also get your first real view of the imposing / intimidating slopes of Mynydd Drws-y-Coed. The path up the rock face is visible in parts and your imagination can fill in the other bits!

Keeping to the West of the wall you crossed just before the summit (wall should be on your left), descend gently to the grassy col before starting the exposed scramble up through the rocks. In a few short sections there are 2 or 3 choices of route, the safest of which generally are the ones nearest Rhyd Ddu though adrenaline junkies may prefer the options closest to the edge. You break through the end of the scramble at around about the 670m contour line from where a much easier path along the edge of the ridge takes you to the summit of Mynydd Drws-y-Coed.

The next section of the ridge to Trum y Ddysgl (the highest point of the ridge) also looks fairly fearsome from the summit of Mynydd Drws-y-Coed. However, in reality it is a simple walk along a good path set a couple of metres back from the spectacular ridge edge. As you might expect from a glance at the map, the summit of Trum y Ddysgl offers tremendous views back along the ridge to Y Garn. The obelisk on Mynydd Tal-y-mignedd - the next objective - is also clearly visible to the West. The broad grassy path from the summit forms an easy descent to the col between Cwm Dwyfor to the South and Cwmyffynnon to the North. However, the narrow rocky ridge at the col requires one or two awkward steps but nothing compared to the earlier scramble. After negotiating the rocky col, the path to the obelisk is broad, grassy and easy once more.

When initially planning this walk, we had intended to reverse the route to get back to Rhyd Ddu. We changed our minds on the ascent of Y Garn and confirmed the change of minds beyond any doubt on the scramble up Mynydd Drws-y-Coed. Plan B was to drop down to Beddgelert Forest from either Mynydd Tal-y-mignedd or return to Trum y Ddysgl then drop to the forest. With the weather closing in and coming from the South East, we opted against those steep descents in to the rain & wind in favour of an easier looking descent from Mynydd Tal-y-mignedd on the sheltered side of the hill.

For the majority of this descent route, there is no path so proficiency with map and compass is required. From the obelisk follow the wall (later becomes a fence) in a NW direction. The views across Llyn Nantlle Uchaf to the coast and Anglesey beyond are impressive. After the boundary becomes a fence, pay particular attention for 2 slight kinks to the right. About 500m after the second of these, the grassed over remains of an old wall on the right meets with a second similar wall running East - West in front of you. From this junction of old walls, follow a compass bearing of 250 degrees (true, not magnetic) for 350m. This will safely by pass steep and rocky ground to the North and lead you to a gate in another wall beyond which is a visible track.

Follow this rocky farm track down hill, quite steeply in places, to meet with a public footpath just West of the farm at Tal-y-mignedd isaf. Turn right along the path, passing through the farm yard and then alongside the camp site to a point where the path splits. Ignore the more obvious path branching off to the right and take the lane to the left across the bridge then along to meet the B4418. Continue East along the road for 3.5km or so back towards Rhyd Ddu. The road walking monotony is rewarded with views of the North face of the Nantlle Ridge and also the impressive and unusual rock formations of Clogwyngarreg. After the exertions of the ridge walk and scramble, the 120m or so ascent on the road section provides an unwelcome sting in the tail. On the edge of Rhyd Ddu you rejoin the diverted footpath used on the outward journey to retrace your way back to Rhyd Ddu station and car park.