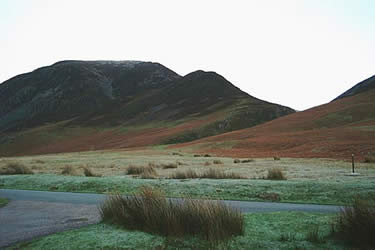 Whiteside and Hopegill Head are more usually climbed as the first 2 peaks of a long walk finishing at Whiteless Pike. Similarly, Grisedale Pike is often climbed from Braithwaite as the first peak in the famous "Coledale Round". This shorter Lake District walk includes the excellent ridge between Whiteside and Hopegill Head before taking in Grisedale Pike and then returning down the impressive trench of Gasgale Gill. After a steep start the walking is on good paths and few walks in the Lake District include so much excellent scenery in such a short distance.

The ridge between Whiteside and Hopegill Head requires some head for heights but the path is level and the ridge is much easier than, say, Striding Edge on Helvellyn. The only real chance of getting lost in mist is at Coledale Hause - but once Lisa beck is found at the western edge of the hause, this will lead the way into Gasgale Gill.

As the B5289 from Cockermouth and Lorton approaches Crummock Water a small car park with a telephone box is seen on the west side of the road at Lanthwaite Green (GR NY158207). From the car park you can look east across the common to see the exit of Gasgale Gill between the slopes of Whin Ben and Grasmoor. The footbridge over the beck as it exits from the gill is the start of the walk.

Walk east across the common for 400 yards towards the exit of the gill where there are 2 footbridges over Liza Beck. Cross the upstream footbridge and then immediately take the path rising steeply to the left up the face of Whin Ben through heather and gorse. The path is mainly on earth with a few rock steps - avoid all paths traversing right towards the gill. Half an hour of hard effort leads to the summit of the minor peak of Whin Ben where path levels and crosses a saddle to reach a viewpoint perched above Gasgale Gill with, above it, the steep final ridge leading to the summit of Whiteside.

The ridge leading to the summit consists of easy rock steps at first, gradually easing to a broad path to the summit cairn at 2319ft. Stretching out before you is the almost level 1 mile ridge leading eastwards to the conical peak of Hopegill Head - with, a mile beyond it and to the left, your first glimpse of Grisedale Pike. Of the total ascent of 2500 feet on this route, you have already climbed 1800 feet in the first mile and a half. To the north, on a clear day, can be seen the Solway Firth and the mountains of Southern Scotland.

The ridge between Whiteside and Hopegill Head has a good path but the drops, especially to the south are very impressive. You may note that the Whiteside "summit" at the start of the ridge is lower than the high point of the ridge! After about 1000 yards there is a shallow depression and beyond it a conical rock outcrop bars the way. This can easily be avoided by a faint path to the left but, if taken direct, it will not prove too difficult for most walkers. Now a narrow arete leads quickly upwards to the small, rocky, summit of Hopegill Head at 2526 feet. The summit is an excellent viewpoint. Down a rock slab to the north west lies Ladyside Pike at the top of the ridge dropping down to Hopebeck and Lorton, to the south is Grasmoor beyond Gasgale Gill and to the south east a path leads over Sand Hill and down to Coledale Hause. Our route heads south-east.

Descend south-east from the summit to a col taking care to avoid the huge drop to the left down the vegetated cliff of Hobcarton Crag (owned by the National Trust and a botanically important site). The col is marked by some small pools after which a short slope leads to the subsidiary summit of Grisedale Pike. From the subsidiary summit the route leads down to a depression before the final climb to the main summit at 2595 feet. Below lies the village of Braithwaite at the foot of the east ridge and to the east lies Keswick with its backdrop of Skiddaw and Blencathra.

Retrace your route for half a mile. Immediately after recrossing the subsidiary summit, take a path to your left dropping south west to reach Coledale Hause after a further half mile. Coledale Hause is the main "crossroads" of the North Western Fells with many routes meeting here. Lisa Beck drains Grasmoor and Crag Hill and reaches the hause before turning west and dropping down a series of waterfalls into Gasgale Gill. Our path takes the north (right) bank of the beck dropping steeply at first into the depths of the gill. After about half a mile the path levels and follows the beck gently downwards between the impressive walls of Whiteside and Grasmoor until the gill narrows sharply near its exit. The path hugs the beck down a series of short rock steps and traverses which look harder than they are - at one point the roots of a tree provide excellent handholds. After 400 yards of interesting terrain the footbridge is reached which is crossed to return to the car park.