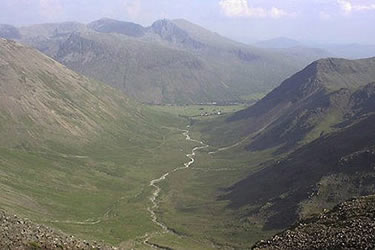 This Lake District walk makes an ascent of Scafell via Lords Rake and the West Wall Traverse. The descent is via Foxes Tarn and Mickledore. Lords Rake has been "closed" for some time now - lots of signs / notices / magazine reports asking people not to use the route - following some pretty significant rock falls blocking the gully. A number of the boulders are loose and therefore present a very real safety risk. This route should not be attempted until further notice.

Note: This walk was described by John Paterson who also took the six photographs of Lords Rake, the West Wall Traverse and Deep Gill. Unfortunately thick mist, which made for dramatic photographs, meant that distant shots of the mountain were not possible. To illustrate the rest of the route Ann Bowker, who maintains the excellent "Mad about Mountains" site, allowed us to use some of her photographs which comprise the first and last groups of pictures above.

INTRODUCTION AND WARNING: Scafell (3162 feet) is linked to Scafell Pike (3210 feet) by the narrow ridge of Mickledore. Unfortunately for walkers, the direct line between the two is barred. At the Southern end of Mickledore is Broad Stand, a series of short rock steps and walls which seems to offer an easy way to and from the summit of Scafell but appearances are deceptive. Broad Stand is not technically very difficult but the consequences of a fall could well prove fatal. Rock climbers use it as a "normal" descent after climbing on Scafell's cliffs - but they have ropes should they need them - and in wet conditions even climbers sometimes give it a miss. With Broad Stand barred to them, walkers have two ways to reach the summit from Mickledore. These are via Lords Rake to the west and Foxes Tarn to the east. This walk from Wasdale Head ascends Scafell by Lords Rake and the West Wall Traverse and descends by Foxes Tarn before crossing Mickledore and back to Wasdale Head.

Scafell summit probably receives only a tenth of the visitors of its neighbour Scafell Pike. This is mainly due to the latter being the highest peak in England and the difficulty (described above) of traversing between the two peaks. This ascent of Scafell gives walkers the opportunity to walk amidst the most impressive rock scenery outside Scotland. Navigation skills are vital in mist especially in finding the Foxes Tarn descent path and in avoiding Broad Stand. That said, there is no great technical difficulty and most experienced walkers will agree that this is about as good as it gets without resort to rock climbing! Although much of the route is on well marked paths an OS map plus a compass or GPS are vital for route finding near the summit in misty conditions. Note: Although the walk is only 6.5 miles allow 6 hours

Pass Wastwater and head for Wasdale Head with its Inn, climbing shop and camp site. The car park by the Inn is for patrons only but there is a large car park in a field about 200 yards south of the Inn (GR186085)

Leave the car park and head south on the road for two hundred yards to a bend in the road where a sign left points to "the Scafells" (GR186084). Take this path across level fields until Lingmell Beck is crossed. After the beck turn right and follow a rising traverse due south until the toe of Lingmell is reached and the path bears left to join the path up Lingmell Gill. Follow the path as it crosses over the Gill and ascends Brown Tongue until a fork is reached at the foot of Hollow Stones. Take the right fork which climbs steadily through Hollow Stones with the cliffs of Scafell Crag above and to the right. Eventually a very large over hanging boulder forces the path to detour round it. At this point the terrain underfoot is almost entirely scree which has fallen from the cliffs above.

To reach Lords Rake from here two choices of route are possible:

(1). In clear visibility follow a scree path steeply up to the right and which leads to the foot of the cliffs and to the start of Lords Rake. Don't take this route unless you can clearly see the path to the foot of the Rake. If you have any doubts take route 2 below.

(2). In mist follow the main scree path as it rises ever more steeply until a steep scree gully leads to the cairn on Mickledore. Turn right and follow Mickledore ridge for 50 yards or so until the cliffs at the end are reached. Look down to the right and a traverse line will be seen hugging the base of the cliffs. Carefully climb down to the traverse which leads to the bottom of Lords Rake after a few hundred yards.

The crags, which tower 500 feet above you, face north. Lords Rake is a scree and boulder filled gully, with vertical walls, which runs south west and separates the western buttress from the rest of the cliffs. Climb the rake with care. It is a mix of mud and scree with larger boulders which are unstable and which may move as you put your weight on them. Ahead you will see a recent rockfall (see picture above). This marks the mid point of the rake and an alternative is to carry on beyond the rockfall. However, if you look to the left as you near the rockfall, you will see a gap in the wall which is the start of the West Wall Traverse (see picture above). The Traverse starts as a groove across the cliff with little or no sense of exposure but as Deep Gill is approached after less than 50 yards, the exposure becomes more noticable!

The first 350 feet of Deep Gill is a rock climb. We have joined above this and no ropes are needed. However the view on a clear day is dramatic and in mist, imagination can run riot. Climb the Gill carefully but with little difficulty. The exit cracks at the top are the trickiest part as they are quite eroded and have formed a series of undercut steps. Keeping your feet wide in a bridging technique seems the simplest way of making progress on the trickiest bits. Suddenly the angle eases and you are on the summit plateau just yards away from Scafell Pinnacle and Pisgah.

In clear visibility the Scafell summit can be seen 200 yards to the SSW. In mist, walk SSW on a compass bearing and note carefully the depression or saddle with a low stone shelter where paths cross your line some 50 yards before the summit. After the summit has been reached return to this saddle. From the saddle a line to the north east leads to Broad Stand and must be avoided. Take the path descending right in a south easterly direction to Foxes Tarn which is the smallest named tarn in the Lakes. Continue on the path as it trends eastwards avoiding the Eastern Buttress of Scafell crags.

The path enters a gully which is followed to a point below the crags where it joins the path up to Mickledore from upper Eskdale. As Mickledore is approached the path passes the base of Broad Stand on the left with its starting crack of "fat man's agony". Look but don't climb! At Mickledore turn right and walk 50 yards to the large cairn marking the descent gully. Descend this with care and follow the scree down to the point on the ascent route above Hollow Stones where the path detours round the large boulder. It is traditional to stop and have a drink here whilst contemplating the cliffs and remembering the highlights of this magnificent walk before heading back down to Wasdale Head.