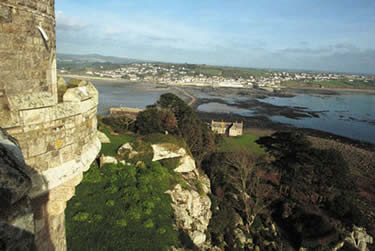 Marazion is an ideal base from which to explore the whole of West Cornwall. The town has a safe bathing beach and a castle-crowned island amongst its attractions. There are shops, pubs, good restaurants and cafes and comprehensive local services. There is ample parking on the western edge of Marazion and the town centre is quickly reached from the car parks. Marazion is distinctive by name and by nature. Although St Michael's Mount may hold centre-stage, the town holds a much broader appeal for the visitor because of its great antiquity, its variety, and its range of excellent services.

Marazion is the oldest chartered town in Cornwall. It was granted a charter of incorporation by Henry Ill in 1257; the charter was renewed in 1595 by Queen Elizabeth. Marazion's modern name derives from the important fairs and markets that existed there until the late medieval period when the town was challenged for commercial supremacy by an upstart Penzance. The Cornish for market is marghas and at Marazion there were two markets, the Marghas Byhgan, the Small Market and Marghas Yow, the Thursday Market. Time has blurred the pronunciations to Marazion and Market Jew, names that have no relevance to historic Judaism.

Today, Marazion still retains the atmosphere and style of the historic status that once eclipsed Penzance. It is a town to browse through and to explore at leisure. Within its narrow streets and mix of handsome buildings is preserved a medieval pattern that has not been distorted by too much modern development. The seafront can be reached from a number of points; the pleasant open area known as The Gwelva offers especially fine views to St Michael's Mount and can be reached easily from Market Place and from The Square.

The town extends some distance to the east along the line of the old turnpike road that once terminated at Marazion. On the eastern outskirts there is another fine viewpoint called The Dollan from where there are incomparable views to The Mount. The name 'Dollan' derives from an old word for enclosure. The Dollan can be reached by a pleasant walk up Turnpike Hill and refreshments can be had nearby.

Behind the main thoroughfare, quiet lanes link the centre of Marazion with the small fields and flower-filled hedgerows of a lovely countryside that matches the charm of this historic Cornish town.

The Town Hall is a handsome building with a distinctive clock tower. The Town Museum is situated in the old Fire Station on the ground floor. Facing out from the town hall, go left along Fore Street to pass a house known as The Shambles. This was a meat market originally; at one time it had an extra storey that was subsequently destroyed by fire. A short distance further on, the Parish Church of All Saints can be reached across a pedestrian crossing. The present church is Victorian but there was a chapel on the site for many centuries. The church has a wonderfully calm and peaceful interior. On weekdays, during the summer months, there are, church stewards on duty to answer queries.

Turn right outside the church. Opposite is the War Memorial. Note the disused steps that rise behind the Memorial. These were probably in regular use for many years and reflect the network of communications that served settlements such as Marazion before cars grew to dominate transport. The steps led to The Beacon, the high point overlooking Marazion. Continue along Fore Street passing some fine examples of old houses, such as Penmeneth with its surviving wooden porch fresco, once typical of village architecture. Opposite Penmeneth, on this right had side of Fore Street, is Leys Lane, This can be followed to reach Marazion Harbour, which has a delightful outlook to The Mount. On the main walk, continue along Fore Street, passing other examples of old houses, such as Trefa on the left and Netherleigh and York House on the right. The latter houses have entranceways below street level.

When abreast of the imposing facade of the Marazion Methodist Church cross the road, with care, then, just past the church car park, turn sharp left up Malthouse Lane. Join Back Lane via a short flight of steps. Continue along Back Lane, enjoying some splendid views of St Michael's Mount and the Bay.

Where Back Lane reaches a junction, go down left steeply, to reach a junction with Beacon Road. On the immediate right, and a few feet up a grassy lane, is the entrance to the Friends Meeting House, built by seventeenth century Quakers and probably one of the oldest buildings in Marazion. The walled surroundings of this delightful building are wonderfully serene. On the corner of Beacon Road is the fine open space of the Memorial Garden, the town's old burial ground. There are seats here, and again this is a pleasant place that reflects the quiet charm of Old Marazion.

To continue the walk, go down the narrow Beacon Road. The black section of wall on the left is built from blocks of copper slag from the old smelting works at Hayle. Use of such blocks for building was very common in the past. At the crossroads, turn right down North Street. The reconstructed well halfway down was the Lower Town Well. It supplied water to this part of Marazion until a piped system was installed in 1878.

At the main road, Fore Street, turn left, passing a typically stalwart building, now a store, but originally the Methodist Free Church, built in 1862. Continue across the entrance to Beacon Road. A short distance further on, where Fore Street curves left into The Square, there is a wide opening to a lane on the left. The house at the entrance to the lane has a wooden plaque on its front wall. The plaque commemorates a reputed visit in 1646 by King Charles II who, as a young Prince, was making his escape to the Isles of Scilly after the Royalist defeat at Naseby during the English Civil War. Note also the intriguing Witches' Ball or 'Pisky Pows' on the ridge of the house's lichened roof. Such pows were installed to dissuade witches from landing! On the opposite side of Fore Street are the Maypole Gardens, another open space with seating and uninterrupted views to The Mount.

Follow Fore Street through The Square. Across the street is the imposing granite facade of the Marazion Institute, built in 1883 and known as The Code Institute after its builder Theophilus Code whose family presented the building to the people of Marazion for use as a library, and for recreation.

Cross the road, with care, and go down the alleyway, signed The Gwelva that lies to the right of the Institute. This leads to an open area with seating, from where there are excellent views of St Michael's Mount and Mount's Bay. The beach is accessible at low water down some steps at the left end of the viewing area. The name 'Gwelva' derives from the Cornish for prospect, or view. From the far end of the viewing area follow an alleyway to reach Market Place. Opposite is your starting point of the Town Hall where a visit to the Town Museum, if not enjoyed already, will tell you much more about Marazion's remarkable history.

This guidebook includes routes to 40 day walks in Cornwall. From short, easy strolls to longer, wilder routes, there is plenty to appeal to both families and experienced walkers. The walks explore the interior and coasts, including walks through picturesque villages, old tin-mining areas and the Lizard and Land's End Peninsulas.
More information

With a long and varied coastline Cornwall offers walkers many wonderful walks using sections of the South West Coast Path National Trail. In places the coastal scenery is very rugged and the walking often quite strenuous. Inland the moors of West Penwith and Bodmin offer a dramatic change of scenery to that encountered on the coast. Further interest is added by pretty villages and harbours, industrial archaeology, mostly focused on the former tin mines, and some outstanding archaeology sites especially in the moorland areas.