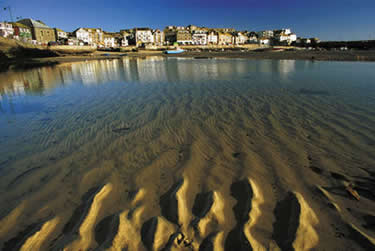 Note - vehicular access to St Ives is restricted during the summer and the best option is to park at Lelant Saltings Station and take the train. You can then enjoy a 3 mile journey to St Ives along one of the most scenic branch lines in Britain. Alternatively you can combine this stroll with a walk from Zennor some five miles distant along the coast to the west.

The history of St Ives lies in fishing, farming and mining, so the extension of the railway line from St Erth in 1877, although an extremely difficult and expensive undertaking, was essential to the development and prosperity of the town, which today relies mainly on tourism.

The walk begins from St Ives railway station (Grid ref SW519401), which has one of the most beautiful views from any railway station in the British Isles. Go up the steps and walkway on the inland side of the station car park. This leads you up to the Malakoff, built at the time of the Crimean War and from where there is a panoramic view of the harbour and lower part of the town. There is also a fine bronze by Barbara Hepworth-Epidaurous, one of a number of her works to be seen in St Ives. Looking towards the east you can see the Godrevy Lighthouse, the inspiration for Virginia Woolfs book To the Lighthouse.

Leave The Malakoff by the steps on the side overlooking the harbour. Cross the road and go down right for a few yards. Turn left down some steep steps. At the bottom turn left past the Pedn-Olva Hotel, site of an old copper mine, from which ore was mined from under the sea and land. One of many mines in St Ives, tin and copper were the main minerals extracted although the uranium which produced the radium that Madame Curie used for her experiments also came from here.

Continue down the narrow lane, called The Warren, to reach Westcott's Quay from where there is a marvellous view of St Ives Bay. The high black weather-boarded building on your right is the Arts Club, once frequented by great artists such as Whistler, Sickert, Jullus and Louis Greer. A short detour up the lane to the left from Westcott's Quay brings you to a cross-roads by the Age Concern building. On the corner of the old Customs House building opposite there is a yellow granite corner stone, carved T.N.G. 1713, which was the Old Royal Naval Garrison, which, housed French P.O.W.s during the Napoleonic Wars.

Retrace your steps to Westcotts Quay and go left along the railed-in Lambeth Walk, named after the popular dance tune. Halfway along go left down an alleyway, then turn right and go towards the St Ives parish church. Consecrated in AD 1434 the stone used in its construction was carried by fishing boats from Zennor. The church stands 119 feet high, unusually high for a Cornish Church, and is dedicated to St Peter and Andrew the fishermen, and St Ia, an Irish priestess who brought Christianity here around the 5th Century AD. The inside of the church is very beautiful and worth seeing if you have time.

Just beyond the church doorway, turn right down Lifeboat Hill o reach the harbour. The St Ives lifeboat station is on the right and is well worth visiting. Ships were once used much more than they are now and many lives were lost in the treacherous seas. Before 1840, when the first lifeboat Hope was built, any lifesaving was done by brave local men or the coastguards. The first motor lifeboat arrived in 1933 and she saved 73 lives before she met her end off the Island on 31st January 1938 trying to save the passengers and crew of the SS Alba.

Go left along the harbour front for about 100 yards. Keep a look out for Hobblers House on the inland side of the road. Cross over to Hobblers House and go sharp left under an archway and up the cobbled alleyway called Court Cocking. Continue up over the steps and turn right into Fore Street. Continue along Fore Street, then turn left up The Digey. From the next junction, the St Ives Tate Gallery can be reached by keeping ahead and following the road round left above Porthmeor Beach. (If visiting the Tate you will have to retrace your steps to the junction). Continuing on this walk, turn right at the junction and there on the wall of Harry's Court is a plaque to Alfred Wallis, the primitive painter, now at rest in St Ives cemetery.

You are now in Back Road West where a number of artists have their studios. This area is known as 'Downalong'. Porthmeor Studios are situated here and have been occupied by such artists as Julius Olsson, Jane and Tony O'Malley, Borlase Smart and Ben Nicholson and are still used by Patrick Heron, Stephen Dove, Roy Walker and others. Beneath Porthmeor Studios is the only pilchard cellar which remains in almost its original state. For many centuries fishing was the lifeblood of St Ives and seining for pilchards became very organised. The huers would watch for the shoals announcing their arrival by a cry of 'hevva'. The boats would take out the seine net, a quarter of a mile in length, which would then be shot round the shoal, often containing millions of fish. The net was hauled into shallow waters and the fish taken to shore in boats called 'Dippers', which often took several days. They were then cured in salt, packed into barrels called 'hogsheads'. The majority were transported from Cornwall and numbered 5,600 hogsheads - 122 million fish. The tradition ended when the last seine was shot in 1924.

Continue past Norway Square where the St Ives Society of Artists, a group of traditional artists, exhibit. The Salthouse Gallery is also here. Just past the entranceway to the Penwith Gallery follow a lane that leads down left then curves round to the right. Take the first opening left down to Porthmeor Beach. At the entrance to the beach bear off right up a surfaced walkway that leads to the important open area of The Island, a grassy hill crowned by the little chapel of St Nicholas. Go up some steps, then keep left and follow a sandy track round the base of The Island. From the track there are splendid views across Porthmeor Beach to the award-winning building of the St Ives Tate.

The sandy track soon merges with a surfaced track. This area is on the migratory path of many rare birds. Seals, porpoises and dolphins may also occasionally be seen. Follow the track past the lifebelt stand, site of the loss of the SS Alba - at low tide, parts of the wreck are still visible. Continue along the surfaced track to where a final steep section leads up to a building known as The Battery. Now a dwelling house, this was built during the Napoleonic Wars. It had three cannons in round emplacements and an underground magazine below the north-west side. The coastguards' lookout was built on the northern emplacement and below this on the lamp rock a light was lit every night to guide shipping.

As you view the town from the battery you will notice the Knill Steeple on the skyline, it was built by Mayor Johannes or John Knill, one of the town's best loved personalities and the customs officer in St Ives from 1762 to 1782.

Walk up to St Nicholas Chapel. It was here that one of the 'Preventive Men' watched for smugglers. Smuggling was the unofficial business in which the majority of the Cornish people seemed to be involved at one time. There are records dating back to 1598 telling of the smuggling of earthen pots, muscatel wine and salt, which was necessary for the curing of pilchards. It must have been a difficult task for the preventive men as every single drinking house and inn in St Ives had a hand in the smuggling business. It is even said that John Knill, collector of customs and Mayor erected the Knill Steeple as a landmark for the smugglers and was also involved in many a plot to handle contraband. None thought of the smuggler as a criminal and 'free trading' was considered 'fair trading' as it brought luxuries for all at reasonable prices.

Retrace your steps to The Battery, then go right, down the surfaced road to Porthgwidden car park. Go diagonally left across the car park to its bottom corner from where steps lead down. At the bottom of the steps go right, then left down an alleyway. Turn right (Porthgwidden Beach can be reached down left.). Walk uphill and when abreast of the toilets, go left and follow the lane round right, then turn left along Burrow Road. Pass Carn Crows Street, Teetotal Street and St Eia Street. At the T-junction go left along Pier View. At the next T-Junction go up left to reach the St Ives Museum. Here you will find a treasure trove of history of old St Ives. Retrace your steps from the museum and now keep ahead to a T-junction with Quay Street. Bear left to explore Smeaton's Pier. Here is St Leonard's Chapel, where for centuries Fishermen of St Ives said prayers before sailing, the chaplain being paid in fish proportionate to their catch. From the Pier follow Quay Street and continue along the harbour front to the Lifeboat station and the parish church from where you can retrace your steps back to the railway station, if required.

This guidebook includes routes to 40 day walks in Cornwall. From short, easy strolls to longer, wilder routes, there is plenty to appeal to both families and experienced walkers. The walks explore the interior and coasts, including walks through picturesque villages, old tin-mining areas and the Lizard and Land's End Peninsulas.
More information

With a long and varied coastline Cornwall offers walkers many wonderful walks using sections of the South West Coast Path National Trail. In places the coastal scenery is very rugged and the walking often quite strenuous. Inland the moors of West Penwith and Bodmin offer a dramatic change of scenery to that encountered on the coast. Further interest is added by pretty villages and harbours, industrial archaeology, mostly focused on the former tin mines, and some outstanding archaeology sites especially in the moorland areas.