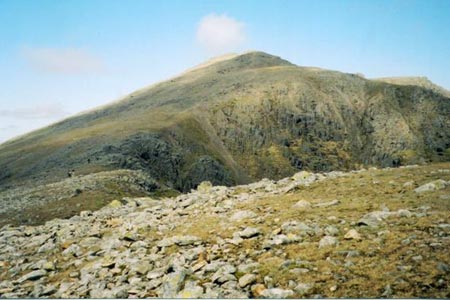 This Lake District walk up the two highest mountains in England from the Eskdale valley, returns via Little Narrowcove and a very long valley walk that offers views of some of the better-known Lakeland mountains, but from less familiar angles. The route involves a significant amount of height loss, which has to be regained later, between Scafell and Scafell Pike. It also features some walking up and down very steep mountain slopes on loose rocks and stones, meaning that progress is relatively slow.

Start at the car park at the foot of the Hardknott Pass (grid ref. NY212011) and follow the road to the south west. Take a path off to the right, opposite Wha House Farm, which climbs gradually in a north easterly direction before the profile of Slight Side appears on the left, the next objective. The gradient gets significantly steeper on the ascent of Slight Side, but the toil is worth it as the top is reached and then the walk between here and Scafell via another minor top consists of relatively gentle gradients.

From the top of Scafell, walkers may be tempted by the most direct approach to Scafell Pike via Mickledore, by descending down Lord's Rake. However, the recommended advice is to avoid this route due to the danger of loose falling rock above the rake. Therefore, this walk route sets off down the steep scree-covered slope to the south east to diminutive Foxes Tarn. Were it not for its prominent location amid such high mountains, a tarn of such a small size would probably not warrant being given a name at all.

More height needs to be lost beyond the tarn as the next stage involves a mixture of walking and scrambling down a gully with a stream issuing down it. At the bottom of the gully, the next objective is to start regaining lost height by walking up to the left amid loose rocks and stones aplenty with Broad Stand and Scafell on the left and Mickledore ahead. At the top of Mickeldore, a view down the other side shows a steep downwards path with the Mosedale Horseshoe beyond. Next, head for Scafell Pike to the north east, a "sea of stones" with the distinctive beehive summit marking the highest point. The highest view in England reveals Great Gable and Kirk Fell now appearing dwarfed to the south west.

Next, descend north east towards Broad Crag. When you reach the col, it is time to start the arduous, steep and rocky descent of Little Narrowcove to the right. Despite the steep, rugged descent from Scafell to Foxes Tarn and similar terrain in regaining height as far as Mickledore, in my view, the degree of difficulty of these sections is less than that of the descent down Little Narrowcove. Bear in mind too that, by this point, people's energy levels are likely to be lower after the earlier ascents and descents. In any case, this is a very tricky section of the walk as you pick your way down a mass of stones and rocks where you need to be more or less continually alert in maintaining your balance on loose rocks. It does, however, make for a very photogenic setting, when looking back, to see Scafell Pike from the back, not an angle it is normally seen from, and there is a rushing beck nearby.

Once you are at the bottom of Little Narrowcove, the going becomes much easier as grassy terrain is encountered. The return route involves a walk down a very long valley, the valley of the River Esk which passes Cam Spout Crag and the giant rocks called Sampsons Stones. Progress now seems very rapid after the painstaking descent down Little Narrowcove and Mickeldore is seen along with the back of the Scafells. At one point, the path leaves the river (to rejoin it later near to Taw House) and heads roughly south to south west, passing Silverybield Crag. The path leads back to near Whahouse Bridge and the road back to the start point.