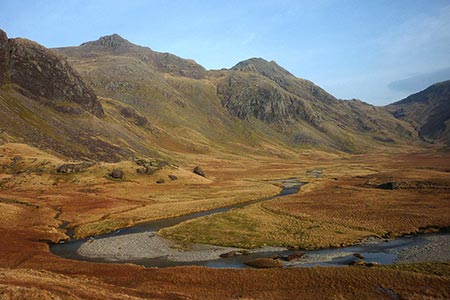 According to figures provided by a Lake District National Park Warden, for every 100 people who climb Scafell Pike, only 9 climb Scafell. The same data source revealed that out of every 100 people who climb the Scafell Massif, 67 do so from Wasdale, 19 from Seathwaite, 8 from the Langdales and only 6 from Eskdale. If those figures are anywhere near true, this route on to Scafell from Eskdale must give you the best chance of enjoying a day out on the Scafell's and avoiding the hordes of others on the "tourist" tracks.

The Lake District walk described below takes in the peaks of Scafell and Slight Side, climbing Scafell by means of a scramble up the ghyll to Foxes Tarn. The route could be extended to take in Scafell Pike as well. Irrespective of whether or not Scafell Pike extension is included, UNDER NO CIRCUMSTANCES SHOULD YOU ATTEMPT TO CLIMB SCAFELL VIA LORD'S RAKE. Lord's Rake has been "closed" for a little while now following a number of rock falls in to the gulley. The rocks are loose and unstable, making a trip up Lord's Rake foolhardy in the extreme, and quite possibly fatal. There are plenty of opportunities for exposure and excitement on this route without taking irresponsible risks.

For many, the excitement of the day can start by driving over the Wrynose and Hardknott Passes from Little Langdale to Eskdale. The preferred parking area is set just off the Eskdale road opposite Whahouse Farm (Grid ref. NY201009). In the event that this area is full, an alternative starting point would be Brotherikeld - approximately 1.2km back up Eskdale (NY212011), next to the red telephone box.

From the parking area at Whahouse Bridge, head East along the road for 150m to where a track leads off left, past Birdhow and on to the farm at Taw House. Here there is a choice of routes - following the public footpath to the right and through the farm, or taking a permissive path to the left. I tend to opt for permissive paths whenever they are available as the farmer has usually provided them for a good reason. In the unlikely event that you do this walk at the end of a drought, the permissive path to the left will be a dry, stony path. At other times, it has a tendency to resemble a (not so) small stream.

Irrespective of whether you follow the permissive path or the public footpath, they eventually merge near a pair of stiles. On this section it is well worth turning round every now and again to take in the views down Eskdale with Hard Knott over to the other side of the valley. Continue along the path to the bridge over Scale Gill, with the picturesque waterfalls thundering down to your left. An awkwardly placed tree makes great photos difficult but doesn't detract from the beauty of the waterfall.

After crossing Scale Bridge, the next key point to aim for is How Beck at the Northern end of Cam Spout Crag. How to get there is a choice for anybody doing the walk.

One option is to turn left on the clearly visible track just after the bridge and climb, quite steeply at first, the lower slopes of Brock Crags. This path is fairly obvious at all times but does get wet as it traverses the marshy ground. Following this route will give a hugely impressive first view of Scafell, Scafell Pike and Great End just as you round the corner at the end of Silverybield Crag.

Keep right after crossing Scale Bridge and follow the path below Heron Crag, passing a number of waterfalls in the upper Esk valley on the way to the confluence of the River Esk and Lingcove Beck at Lingcove Bridge. You then need to follow the River Esk (left hand of the streams) and this is easiest done if you can ford the river to the right hand (Eastern) bank and pick up the path around Throstlehow Crag and Scar Lathing.

It is necessary, somewhere near the confluence of How Beck and the River Esk at grid ref. NY220056, to ford the River Esk. Irrespective of how you get there, the foot of the waterfalls at the side of Cam Spout Crags makes a great place for a coffee break. From here continue North Eastwards between Central Pillar and the River Esk to the next obvious valley on the left - Little Narrowcove. Turn left on the path here to climb steeply between Scafell Pike and Ill Crag as far as the path junction below Broad Crag. Turning left here will lead to the summit of Scafell Pike. From the summit of Scafell Pike, descend WSW to Mickledore then left along the path beneath the East Buttress of Scafell to join the Foxes Tarn path.

An obvious stone stepped path then climbs to the North of Foxes Tarn, zig-zagging it's way up through the scree slopes to the plateau summit of Scafell. Providing the summit is not shrouded in cloud, the views from Scafell are stunning. The summit of Scafell is the only vantage point I have found in the Lakes where Scafell Pike appears to be higher than Scafell - from all others Scafell appears to be the big daddy of Lakeland. As you soak up the views, almost certainly with very few other people, you will be grateful the hordes have been left behind on Scafell Pike, many who have done the ascent just for the sake of climbing England's highest peak.

The peak of Slight Side to the South is obvious in all but bad visibility though the path isn't always clear. Descend to the South along the edge of the escarpment, passing through rocks and scree, to reach the rough moorland grass. Continue in a basically Southerly direction across the broad, fairly flat moor, with the best views being from the edge of the escarpment to the left. The summit of Slight Side is easily climbed but doesn't offer any views not already seen on the descent from Scafell.

It is however another tick on the list of Wainwright's. From the summit Slight Side, continue in a Southerly direction, swinging left (East) then right (South again) on the initially steep and rocky descent. Until reaching the easier going below the rocks / scree, the path is not always obvious. Some cairns marked on the OS map would appear to have been dismantled to provide material for the "path" in places. Once down to the more level ground, the going is much easier, but also becomes much wetter once more. The path is obvious now and the going is easy all the way past Cat Crag and back to a stile at the edge of the car park.

A guidebook to the 73 mile Cumbria Way, an easy long-distance walk though the heart of the Lake District National Park, from Ulverston in the south to Carlisle in the north, with good transport links to either end. The route is largely low-level but this guide offers alternative mountain days to climb some of the famous fells en route.
More information