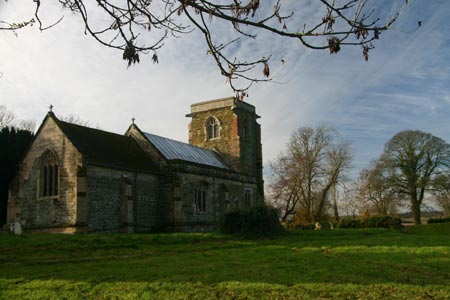 The final half of this full day trek crosses some of the highest ground of the southern Lincolnshire Wolds with wonderful views virtually all the way. Early on as we head towards Bag Enderby we cross the infant River Lymm, the "Brook" of Tennyson's famous poem. On arrival you should take a few minutes to visit St Margaret's church and the display and map about the river. The church itself is over 600 years old now for it was in 1407 that Albinus de Enderby had it built from local sandstone. This is known colloquially as "greenstone" because it contains the mineral glauconite that weathers to a greenish hue on exposure to air and quite fortuitously it compliments beautifully the red brick repairs of later centuries. Also inside is a magnificent octagonal font bearing a rare pieta carving from about 1350 and some early stained glass re-used by Albinus.

Dr. George Clayton Tennyson came to Somersby (and Bag Enderby) as rector in 1808. He had been passed over in favour of his younger brother Charles for the inheritance of the family estates at Tealby and whilst "the church" not being his first calling remained here until his death in 1831. Ten of his twelve children were born at Somersby with Alfred being born on the 6th of August 1809. Something of a prodigy he was educated at home, then at Louth and finally Cambridge. His eventual rise to Poet Laureate is well known of course! Somersby's brick and stone church is much like Bag Enderby's - and it's another St Margaret's! It stands just across the road from the former rectory and it too has a Tennyson exhibition. Architecturally its one rare feature is a complete churchyard cross.

Beyond Somersby we re-cross the "the Brook" to pass the old village quarry (good for picnics!) and cross the Greenwich meridian at Grid ref. 335731. We then skirt the village of Tetford. Some walkers may succumb, as apparently Tennyson did, to the lure of the White Hart Inn, before making the long climb to Fulletby.

The hills surrounding Fulletby Top have been home to mankind for at least six millennia. Archaeological finds of worked flints, weapons and pottery all over the area from Hoe Hill in the south (Grid ref. 311728) to Nab Hill in the north (Grid ref. 307740) date from the early neolithic period (4,000 BC) to mediaeval times. Hoe Hill dominates the landscape but is not, as it's appearance might suggest, a prehistoric hill fort; it is merely capped by hard erosion resistant carstone.

Beyond Fulletby the Viking Way leads gently, but consistently downhill for the final miles to Horncastle. Magnificent views continue on this section however and around grid ref. 280726 extend to both Boston "Stump" and Lincoln cathedral.

Notes For bus times see www.lincolnshire.gov.uk or Contact Traveline. The journey from Horncastle to Hagworthingham takes about 10 minutes. Unless detouring into Tetford walkers must be self-sufficient.

Once in Hagworthingham walk through the carpark of the George & Dragon inn, pass a house and continue over two fields to join a lane. Turn left and follow this over two fords with footbridges (the second being Tennyson's "Brook") to Bag Enderby. Walk past (or through) the churchyard into the dead-end lane beyond. From a cottage the footpath ahead follows a curving field edge round to a stile near its corner. From there aim across two meadows with stiles towards the left of White House Farm. Go through the farmyard and turn left along the road to Somersby village and church.

Continue past the church keeping ahead at a "T" junction to reach the old quarry and soon afterwards cross the Greenwich Meridian. Then take the next footpath on the right and, keeping right at a path junction reach South Road, Tetford. Turn left, then right into East Road. After about 150 yards go left on a path beside a stream keeping forward at a path junction into Mill Lane. (Stay on East Road for the White Hart.)

Follow Mill Lane to a road junction then bear right and almost at once bear left onto another path by trees; this soon crosses a footbridge on the left and passes between lakes to a picnic area. Keep forward to a road, first going right a few yards, then left along the first headland footpath. At another road go right again for 250 yards to a bend. Here a permissive footpath goes off left, up past some woods and then turns left at the field corner to reach a stile by a gate in the next corner. Cross a track, following the path ahead past a lake and along a field edge until a public footpath joins from the left. Keep ahead now past woods and uphill across open meadows to the road at Fulletby.

Take the lane opposite through the village and in a further half a mile bear left at the entrance to Grange Farm. ( "Helmet" waymarks indicate that we are now on the Viking Way.) Beyond the farm the path veers right over a field then turns left by a hedge, soon cutting through it and zig-zagging down to a four-way footpath sign above West Ashby. Turn left here following the waymarks to a lane near Low Toynton.

Here the Viking Way turns right along the road but I recommend the prettier option that follows the lane opposite into Low Toynton. After the ford bear right, then swing right again past Manor Farm and keep ahead at a road junction, to join the Viking Way again. At the edge of Horncastle take the footpath on the left following it through a right-hand bend to a road and make your way via Bowl Alley Lane, The Becks and Banks Street into the town centre.