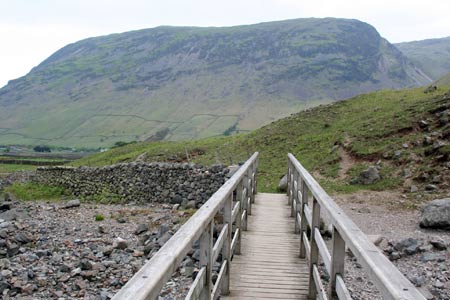 This tough but exhilarating full day Lake District walk tackles the 2 highest summits in England but avoids the hordes for the most part by taking a little used route up a spectacular gill. This is a serious route that involves some short but steep scrambles that cannot be bypassed. On the section from Spouthead Gill to the start of Piers Gill, the path is, in places, vague at best and can be easily lost. Piers Gill is best avoided altogether in misty, wet or windy weather.

I don't want to "teach granny to suck eggs", but, the weather can change incredibly quickly around the Scafells. When we did this route in mid May 2008, the weather at the start was reasonably warm, calm, dry and the Scafell summits could clearly be seen. Long before we reached the summit of Scafell Pike, the temperature was close to 0 degrees C, sleet was falling, the wind was howling and the cloud base was somewhere around 500m ASL. Sadly we came across a good number of people at the summit clad in trainers, jeans and a cotton T-shirt with no rucksack, no additional clothing, no waterproofs, no food or water. No wonder the volunteers of the Mountain Rescue Teams get frustrated with ill-prepared walkers.

From the Wasdale Head car park follow the bridlepath / track signed to Burnthwaite. After a short distance you will pass St Olaf's Church set amongst a group of yew trees. This is the smallest church in England. Continuing along the track, you will come to Burnthwaite Farm where you follow the signs to take you around the farm on the left, after which you head East along a path known as Moses Trod.

This path will quickly bring you to a footbridge across Gable Beck. After crossing the bridge, the path divides and you should ignore the path to the left that starts to climb the slopes of Great Gable in favour of staying on the path alongside Lingmell Beck. About 400m after the footbridge, the path splits once more though this is far less obvious on the ground. There are no obvious guidance points to look out for so you will need to look carefully for the grassy path across a boggy section of ground.

After passing through the gate, continue following the path alongside Lingmell Beck until just after it's confluence with Spouthead Gill. Here you need to ford the stream then follow the vague grassy path on the far side to start climbing the tract of land between the two streams. As you arrive at a group of rocks at grid ref 214-090, the clearer path veers off to the East. This path should be ignored and continue instead now on a Southerly heading towards the bottom of Piers Gill that is now coming in to view. The path is easily lost at this point, but if you do lose the path, keep between the first group of crags and Lingmell Beck and follow your compass South across the rough and at times boggy moor will see you find the path again.

You soon come to another stream that needs to be forded and then suddenly you are at the bottom of the deep ravine of Piers Gill, in its dramatic setting with the towering rock face of Lingmell providing an awe inspiring backdrop.

The first section of walking up the side of Piers Gill, though rocky, is fairly straightforward. Having lulled you in to a false sense of security amidst the imposing crags you are suddenly confronted with rock walls on all sides. Those who, like myself, prefer to utilise walking poles need to stash them away for a while now as they will be more of a hindrance than a help as you take your choice of route to scramble up the rock. There are 2 or 3 unavoidable short sections of scrambling and plenty of opportunities for more scrambles for those so inclined.

After passing the 'elbow' of the gill, the walking becomes generally much easier again as the path leads you to it's junction with the Scafell Pike "Corridor Route" from Styhead.

At this point there are a choice of routes. One option is to continue ahead at this junction, heading slightly E of S, and climb next to the infant Piers Gill, past Dropping Crag and to the saddle between Scafell Pike and Broad Crag where turning SW will lead steadily upwards to the summit of Scafell Pike. This route prolongs meeting the inevitable crowds on England's highest peak as long as possible. A navigationally easier, though significantly busier option is to turn right (SW) here, initially climbing gently, until meeting the main "Hollow Stones" path from Wasdale, then follow 'the motorway' to the summit of Scafell Pike.

When we arrived at the summit on this occasion, we had no desire to hang around - (a) the cloud base was about 500m lower than the summit so there was no view, (b) it was freezing cold [sleet was falling in mid May] and (c) the summit was packed with 300+ others.

The descent is made by following the reasonably clear path that starts out just N of W before looping round to head down in a SW direction amongst the rocks, scree and boulders to Mickledore. Turning R (NW) here gives an escape route back to Wasdale. The main route however continues by turning left (SE) and continuing (unfortunately) to lose height down the steep rocky slopes towards Eskdale. At grid reference NY212065 look for a path amongst the rocks on the right, just North of a stream. You turn right here to start an easy scramble climbing the stream and leading up to the beautiful Foxes Tarn.

From the tarn, the path veers away to the right (NW) and starts a short but steep climb on fairly loose scree to the summit plateau of Scafell, the summit itself being a short walk SSW from where the path from Foxes Tarn deposits you on the plateau.

From numerous angles, Scafell appears to be a higher peak than Scafell Pike, but Ordnance Survey document otherwise. Certainly Scafell is, in the opinion of many, a far more impressive peak. With the masses being lured by big brother across the way, you will (weather permitting) have far more chance to admire the view from Scafell than you will from the Pike.

From the summit, take the clear path heading almost due West initially and follow this as it descends through the rocks and scree. There are a couple of places where visibility of the path is lost but looking further ahead you will be able to pick up the path again and then pick the best route for you across the rocks. Around the 900m contour level you leave the worst of the rocks and scree behind for a more obvious path, sometimes grassy, at other times more stones.

At grid reference NY20350661 there is a fork in the path. Stay with the more obvious of the two paths (the right hand one) on an initial North West heading. When the gradient eases and you start to cross Green How, the going can get very wet and boggy underfoot for 1km or so. The underfoot conditions improve again as the gradient steepens and the direction changes to the North West once more.

The path then basically follows a line of descent between two streams, crossing the boundary of the National Trust land before meeting the obvious bridle path from Burnmoor Tarn. Turn right (North) on the bridle path, soon arriving at the picturesque Lingmell Gill where a left turn leads to a bridge across the stream and then back to the camp site. Continue along the track back to the main parking area at Wasdale Head.