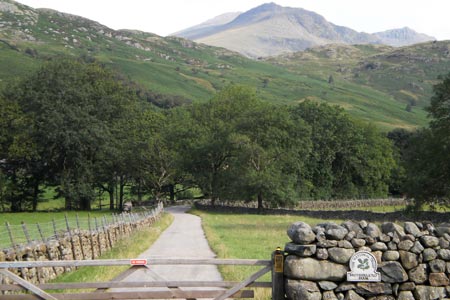 There are several different routes to the summit of Scafell Pike (3,209 feet), England's highest mountain. This route features a relatively long walk-in along a valley from the Eskdale valley to the south and includes two summits, Bowfell (2,959 feet) and Esk Pike (2,904 feet), before reaching Scafell Pike. Great End (2,986 feet) is an optional extra while the route passes between Broad Crag (3,064 feet) and Ill Crag (3,068 feet), which form part of the Scafell group and are not normally considered to be separate summits in their own right. People following this route should not attempt to climb Scafell from Mickledore using Lord's Rake due the dangerous state of this route.

This is a long and potentially strenuous Lake District walk for which at least nine hours should be allowed, more if going on to Scafell as well. If Scafell is additionally included, then there follows a significant height loss from Mickledore which has to be regained by way of a tough climb up to Scafell to add on to what is already a long walk. On the face of it, the easiest part of the walk comes at the outset as for the first few miles, you are walking along a valley and height gain is gradual. Bear in mind though, that the conclusion is similarly straightforward once the descent has been made from Mickledore down past the cascades of Cam Spout, leading to a walk back down a valley of similar length to the walk-in.

From the car park near the foot of the Hardknott Pass, walk down the tarmac road through woodland and take the first turning on the right which passes through a wooden gate and the scene is set with Slight Side and the Scafells appearing ahead above bracken-covered rocky hills. Follow the path to the right of the River Esk, and it heads roughly north east until you reach a packhorse bridge, Lingcove Bridge. Bowfell stands sentinel at the head of the valley and seems a long way off in the initial stages of the walk. There is a divergence of paths at the bridge, but take the one to the right, steeply to begin with. After a mile or so, the path starts to gain some height in earnest on the approach to Three Tarns and this is one of the main landmarks to be reached on the walk. Crinkle Crags are now on your right and Bowfell now looms large on your left. Looking back from Three Tarns, there is a fine view across to the Scafells (as shown in one of my photos).

Bowfell is close to belonging to the select 3,000 feet plus Lakeland group at a height of 2,959 feet and next begins its ascent by way of a steep, rocky path that winds its way up before the gradient eases off. The summit can be seen ahead, reached by a path through rocky terrain and some of the spiky summit rock formations are a little reminiscent of the Glyders in Wales. The impressive sloping Bowfell slabs appear on the right with the back of the Langdale Pikes beyond. The small summit area makes a good place for a stop and a chance to see the view - if cloud levels permit. Next head north over rocky terrain from Bowfell and then west down to the col at Ore Gap. Then follow the path up again to the next mountain, Esk Pike which has a rocky summit with a small rocky cairn. Angle Tarn cannot be seen below to the right from the main path unless a digression is made to the right from the path on the way up Esk Pike. Another rocky descent leads down to the next col, Esk Hause. The Langdale Pikes, which loom large when seen from below in the Great Langdale valley, now appear from the back as indistinct rounded tops at the edge of a largely featureless expanse of grassy felllside.

Esk Hause is a popular crossroads of paths and Great Gable and Green Gable appear to the right beyond Sprinkling Tarn with Allen Crags to the right of Sprinkling Tarn. The path up from Esk Hause skirts to the left of the next summit, Great End, which is an optional extra, a few hundred yards to the right. Trending more or less due south west over more rocky and rugged terrain, the path now similarly bypasses two more summits, passing between Broad Crag on the right and Ill Crag on the left. It appears that these tops are seldom-visited judging by the lack of anything in the way of a clear path to either summit. Broad Crag's summit is a mass of shattered rocks and stones. Before reaching this point, the view to the right reveals the tiny tarn, Lambfoot Dub, and part of Styhead Tarn with the Gables beyond. Clearly seen ahead now is the final drop down to a col and steep rocky ascent up again to "the beehive" at the top of Scafell Pike. If the weather is clear, there is a good chance you will see some people already there ahead of you.

Once you have finished looking at the 360 degree view from the highest point in England, a cairned path leads from Scafell Pike down to Mickledore. The cliffs of Broad Stand on Scafell appear to striking effect from here. The walk goes down from Mickledore to the long valley leading to Eskdale. If time and energy levels allow, Scafell can also be included in the route by ascending the gully to the left of Broad Stand to Foxes Tarn and on to the top of Scafell, descending via Slight Side.

The descent from Mickledore is very steep to begin with and care needs to be taken with loose stones. The going becomes easier further down and the cascades of Cam Spout are reached near the bottom of the descent on the right. At this point it is easier to shuffle down over rocks to the left of the cascades than to walk. On reaching the valley, a decision needs to be made concerning the return route. One option is to head south east and cross over the River Esk and walk over Great Moss to follow a path that brings you back to Lingcove Bridge where it is a simple matter of reversing the outgoing route. However, this walk description follows a different way back.

From Sampsons Stones follow a sheep like track south east then south west which stays reasonably near to the River Esk to begin with before trending away from it. The route leads south west down the long valley, losing height more quickly down through bracken-covered slopes leading to Scale Gill (waterfall) at Scale Bridge. The farm of Taw House is passed later and a public right of way by the side of a grassy field leads to a wooden footbridge and the early stages of the outgoing route are once again reached. From here it is a simple task to walk back to the main road, passing a red telephone box that has seen better days, then the road leads uphill through woodland and back to the car park.

There are options to cut short the walk if need be, for example, due to deteriorating weather conditions. These options are:

1) From Esk Pike, down the valley back to Eskdale.

2) Little Narrowcove between Ill Crag and Scafell Pike, though I would advise not to choose this route as a first choice since it is very steep with loose rocks and stones.

3) Return from Bowfell to Three Tarns and do the outgoing route in reverse.