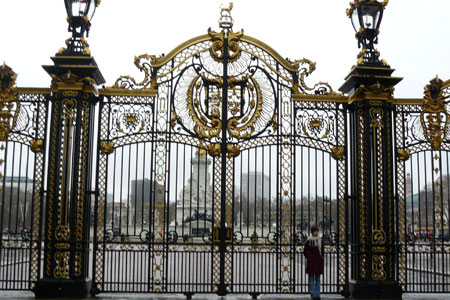 This is an easy walk through Central London, passing lots of tourist attractions and with lots of things to keep the kids interested. The walk starts at Green Park Underground Station and finishes at Trafalgar Square. It will take at least two hours and could last all day.

From the underground platforms, follow the signs for the Buckingham Palace exit. When you get back to ground level, cross the road to the gates in to the park. Follow the path through the park to the spectacular gates at the end of the park next to Buckingham Palace.

From the palace, go past the big statue of Queen Victoria and in to the road called The Mall then go in to the park on the right. This is St James's Park which has a nice lake and some lovely trees and flowers. There are lots of different animals in the park too - we saw white swans, black swans, pelicans, fancy ducks and grey squirrels as well as lots of birds.

When you get to the part of the lake where there is an island, on the left hand side is a café that does wicked Hot Chocolate and the prices are quite cheap for London.

Turn right along the road - this is Whitehall where lots of Government buildings are. Part way along the Whitehall, one of the roads to the left is Downing Street where the Prime Minister lives. At the end of Whitehall you come to a very busy road so be careful crossing the road to get to Big Ben and The Houses Of Parliament.

Go over the bridge to cross the River Thames then turn left on to the path along the side of the river. This path takes you past Lambeth Palace then opposite the Houses Of Parliament to Westminster Bridge. Carefully cross the road and carry on along the Thames Path to the London Eye.

After walking under some road bridges and some more for trains, you go past the Tate Modern gallery and also a really old theatre called the Globe before coming to a really old ship called the Golden Hinde near to Southwark Cathedral and some old cobbled streets.

When the Thames Path gets back next to the river, the old warship HMS Belfast and Tower Bridge can be seen. HMS Belfast is interesting to go round and see how sailors had to live and work during World War 2. Walk across Tower Bridge to the other side of the river. If you want a fantastic view of London from somewhere different, the walk across the two high level platforms of Tower Bridge is the place to go. From Tower Bridge, walk up the hill, passing the side of the Tower Of London then follow the road round to the left to the stop for the number 15 bus.

The buses are very frequent and quite a lot of the number 15's are the famous old red buses. The bus route goes past Monument and St.Paul's Cathedral and, if it is one of the old Routemaster sort, it's last stop is Charing Cross Station which is only a short walk away from Trafalgar Square with Nelson's Column, the National Gallery and views to the Houses Of Parliament. From Trafalgar Square there are lots of buses to help you get to where you want to get to, or you can get the underground from Charing Cross.