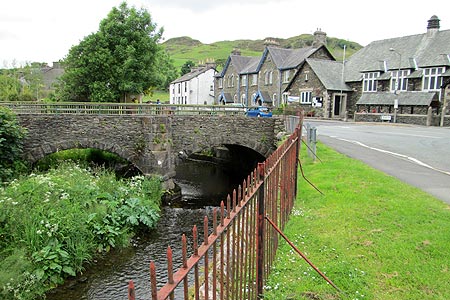 This Lake District walk explores part of a lesser known area of the National Park away from the tourist traps of nearby Windermere, Bowness and Ambleside. The walk includes three tarns but no tops and the whole walk can be completed in around three to four hours. The route mostly follows public footpaths with the occasional country road. While it is essentially a circular route, an "out and back" is needed to include Gurnal Dubs, but it is worth the digression as this is the prettiest of the three tarns.

Follow the main road north out of the centre of the village of Staveley, overlooked to the west by Reston Scar, and turn right over Barley Bridge, pausing to look at the weir which presents a pleasant vista backed by green fields and hills. Turn right immediately after the bridge and then left where a public footpath sign indicates a way between houses and the way ahead comes into view up a grassy hillside alongside a dry stone wall on the left.

As the gradient eases off, you pass a wood on the right and while the view looking back down to the village is quite appealing, and about to disappear, better views appear later on in the walk as more height is gained. Follow a few ladder stiles over dry stone walls as the path goes down to Littlewood Farm. Turn right along the minor road and take the next left turning down to pass through the next farm, Birk Field. Beyond the farm, the path passes a stream on the right and as it goes uphill it reaches a T. Bear right here but almost immediately turn left again uphill along a less obvious path that gains height steadily and the view in reverse keeps getting better the higher up you go. The Langdale Pikes and the Coniston fells are seen afar as well as part of the route followed thus far. Once over the brow of the hill, Potter Tarn appears on the left. This is a reed-fringed tarn and a huge concrete dam to the right dominates it's appearance. It is quite a pretty water otherwise, with a tumbling beck on the far side, and stones seen on the bottom of its clear water near the shoreline.

The walk could be shortened here by way of a direct descent to the south but a third water, Gurnal Dubs, half a mile to the east, is included here. To the east of Potter Tarn, some stone steps up a dry stone wall give access to an obvious rising path and another stile over a wall near the top of the next hill. In keeping with the walk generally, the higher up you go, the better the views are looking back and this ladder stile is the highest point reached on this walk. A path leads down to the tarn which is set among rocks and heather. There is a stone boathouse near to one shore and a tree-clad hill-like island is separated from the main land by reeds where the tarn has become partly overgrown. An obvious embankment to the right gives the tarn an artificial appearance and originally there were three smaller tarns.

Returning to the stile, Potter Tarn can be seen framed within the stile as you climb it. On retuning to the stone steps over the wall, a path off to the left leads to the third and final tarn on the walk. In common with the other two, Ghyll Pool has an obvious dam but is nonetheless quite pretty with trees reflected in its still waters and it can be seen from closer to by leaving the main path, though a barbed wire fence prevents access to the shoreline as it is a reservoir. Ghyll Pool is fed by the outflow of Potter Tarn. The path now descends, steeply in places, to the farm at Hundhowe, reached by turning down a narrow path to the right between encroaching vegetation. The walk can be shortened by following a secondary road back to the village. A slightly longer but more scenic route goes along part of the Dales Way by the river via the wooden bridge at Hagg Foot.

There are three other named tarns on Potter Fell - Low, High and Middle Taggleshaw, but these are not included on the walk as they are now mostly or entirely overgrown.

Walking the Lake District Fells - Mardale and the Far East

Part of the Walking the Lake District Fells series, this guidebook covers a wide range of routes to 36 Lakeland summits that can be climbed from the Ullswater, Haweswater, Troutbeck, Kentmere and Longsleddale valleys, with highlights including High Street, Place Fell and the Kentmere fells. Suggestions for longer ridge routes are also included.
More information