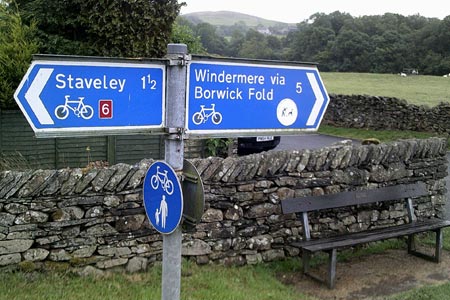 According to Wikipedia, the hill of School Knott is to the west of Windermere town, however, this is not correct - it lies about a quarter of a mile to the east of the periphery of the town. In contrast to the busy streets of Windermere and nearby Bowness, the area covered by this Lake District walk has a very remote and "off the beaten track" feel about it. Given its proximity to the town of Windermere, you can expect to see a few folk around School Knott, but the rest of the area could well be completely devoid of other walkers with perhaps just the odd car. This is an area of low hills, undulating land, narrow country lanes and grazing sheep and cattle with a few tarns. School Knott (760 feet) and Grandsire (818 feet) are the two named hills included in the walk, of similar height to the better-known Orrest Head (784 feet) in common with which they provide fine views of Windermere and the fells beyond for relatively little effort. School Knott is included in Alfred Wainwright's book "The Outlying Fells of Lakeland". Despite the reference to "outlying fells", Windermere is pretty central in the context of the Lake District. On a day when the main peaks are in dark cloud and possibly rain, as they were the day I did this walk, localised weather conditions may make this a favourable choice. Whatever the weather, for those who have done the usual Lakeland peaks, this walk offers a novelty factor. School Knott is the pick of the four tarns on the walk and is the only one that offers ease of access and an inducement to linger.

School Knott can be approached from either Windermere or Staveley but this route strikes a compromise by using the in-between village of Ings as a start and finish point. There is a small car park off the busy A591 or off road parking, or public transport can be used (555 bus between Lancaster and Keswick). Follow the minor road due south west under the railway line to pass a public footpath sign on the right for Yews in a quarter of a mile, a point the walk returns to in the latter stages. As the road passes High Fairbank on the left, it goes uphill and a copse appears on the right as the road gains height and goes past a metal gate. Leave the road to climb the unnamed rocky knoll on the left, apparently not considered worthy of a name judging by the Ordnance Survey map. There is a vague semblance of a path in places but it is easier to invent your own route. A dry stone wall has broken down in several places. At the top, two of the four tarns are seen. To the south-west, Borwick Fold Tarn is seen as a small body of water largely covered by vegetation and resembling a large pond. To the south-east, a much larger tarn, and free of surface vegetation, is Middle Fairbank Tarn, named merely as "reservoir" on the map. Traffic can be seen in the distance rushing along the busy A591 a mile or so away. School Knott and Grandsire are also in view and this is where the walk heads next.

Return to the road and bear left. Turn right at the T junction and a closer view of Borwick Fold Tarn is seen over a wall to the left before the road passes the houses of Borwick Fold. Continue to follow the narrow gated country lane. Turn right at Hag End when a sign for the Dales Way appears on the right just before Outrun Nook. The walk returns to this point later. You are now about a mile from School Knott. The path ahead leads down to the tarn at School Knott but to reach Grandsire, it is necessary to leave the path and walk across grassy slopes to reach the small cairn at the top. What Grandsire lacks in height it makes up for in the quality of its all-round views.

Next the walk heads down gentle grassy slopes to School Knott Tarn which lies in the dip between Grandsire and School Knott. Long and narrow, this reedy water is seen to best effect when seen at shore level from either end. Five Scots pine trees stand sentinel on a slope at one side of the tarn. School Knott is reached via a gate and gentle grassy slopes. It does not have a cairn but it offers a fine view looking down on Windermere, both the town and the lake and (if clear) many of the Lakeland peaks on the distant horizon. In that sense it is similar to Orrest Head but without the crowds.

Return to the tarn and take the footpath off to the right, turning left when you reach a T junction. Follow the bridleway ahead which offers little in the way of views but goes along a country lane and past some houses before reaching a T junction with a main road. Follow the edge of the main road until taking the next turning on the left. Cleabarrow Tarn is a private fishing water belonging to the Windermere, Ambleside and District Angling Association (WADAA). It is almost completely obscured by trees when approaching along the first lane at Cleabarrow and the view is only marginally better from the second one, the minor road back towards Hag End.

For the return route, take this road past Outrun Nook and Hag End, then take the next turning on the left, another minor road up a hill as far as a sign for Yews on the right. A right turn here leads to a public footpath on the left which, although indistinct, goes across fields and back to the road leading back to Ings and the start point.