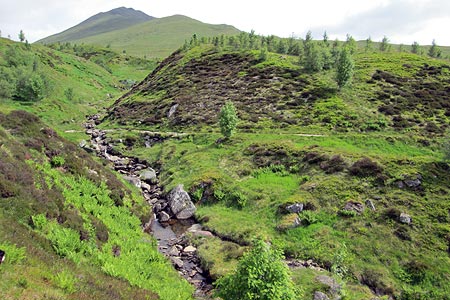 Ben Lawers is the highest mountain in the UK south of Ben Nevis and is the second Munro on a west-east traverse of a ridge that includes five Munros to the north of Loch Tay. The difficulty facing walkers doing the ridge as a linear route is how best to return to the start point at the Ben Lawers National Nature Reserve. In the absence of a suitable car driving arrangement, one option, featured here, is to do the first two Munros only and return by a slightly different route to make it more of a round trip. The walk satisfies a number of likely requirements. You avoid an "out and back", the prospect of fine views in all directions there are clear paths throughout, and you have the accomplishment of topping two finely shaped and picturesque peaks, which in the case of Ben Lawers, involves topping a mountain which is the tenth highest in Scotland and one which at 3,983 feet, falls just short of 4,000 feet. That said, the 4,000 foot plus status appears to count for little in some instances since, for example, the two Aonachs, Mor and Beag, appear to be largely neglected mountains despite both being over 4,000 feet high, a distinction that belongs to only nine peaks in the whole of the UK. It is the "CP factor" that makes a difference - car parks, clear paths and, perhaps to a lesser extent, company (of) people. As it is, Ben Lawers is a popular mountain without being an additional 17 feet higher.

The walk starts at the car park to the left of a narrow road which leads off the A827 north of Loch Tay. If you wonder why the "P" is shown on the right of the road on your map, the answer is that it used to be on the right as recently as a couple of years ago (2011). However, there is no sign of it now and the new, larger car park is on the left.

The route is very simple. Follow the path up through the nature reserve and on to open felllside to climb the first Munro, Beinn Ghlas, then down to the bealach and up again to Ben Lawers, then on the way back, at the bealach, take the lower path that skirts the first Munro to rejoin the outgoing route.

This walk description would not be complete without saying something about the merits of Beinn Ghlas. Although Ben Lawers is the main attraction of the walk, Beinn Ghlas is a fine mountain in itself, a shapely pointed and picturesque peak with a big drop off to one side, yet it seems almost incidental in the pursuit of Ben Lawers since it is passed en route. Yet if it were in the Lake District, it could well be considered in the same bracket as a Bowfell, a Red Pike or a High Stile. Admittedly, the initial stages are relatively dull and involve following a path that winds its way up grassy slopes but the scenery becomes more varied and rockier as height is gained and a couple of sections are passed briefly where the gradient eases off temporarily before the terrain becomes steeper again. It doesn't yield it's summit immediately on the ascent though as there are a couple of false summits as if the mountain requires a bit more effort on the part of the walker to enjoy the feeling of being on the very top. It is only when you top the summit that you get your first view of Ben Lawers which has until now remained hidden behind the bulk of Beinn Ghlas. Loch Tay, long and narrow, dominates the view to the south-east while Meall Nan Tarmachan, another Munro, is seen in retrospect to the south-west.

The path along the ridge is obvious as you descend to the bealach before climbing up a rocky path to gain the higher of the two Munros. The rocky summit of Ben Lawers has a trig point and a cairn. Given the altitude, even on a warm day in summer it may be advisable to put on extra layers here if stopping for any length of time. The summit feels significantly higher than the surrounding peaks, particularly Beinn Ghlas. Seen from Ben Lawers, it has a visual appeal that makes it stand out from the rest of the peaks of the ridge - pointed, shapely and rocky. From the top, the path leading to Beinn Ghlas from Ben Lawers looks a bit like an unsurfaced road while a tiny lochan shows on the bealach below. To the east, Lochan Nan Cat nestles beneath An Stuc, the next Munro to the east.

For the return route, there are two options. For this route, I am suggesting that at the bealach you bear right and go back via the lower path. This has the advantage that you go back a different way, though the disadvantage is that, the views are far better by reversing the outgoing route. In particular, once you have left the bealach below Meall Corranaich the views have largely gone. Walkers with time and energy to spare may want to climb Meall Corranaich from the bealach. The lack of an obvious path up this mountain suggests that this is not a popular route choice.