London Walk
Parliament Hill and the ponds of Hampstead Heath 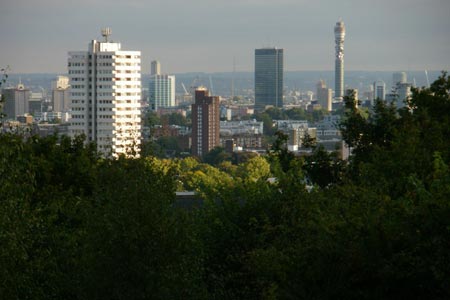 Hampstead Heath is situated just a few miles to the north of Central London. Despite its relative proximity to the centre of the city, "The Heath" as it is known locally has a wild, countryside feel about it. It is an area of land, 790 acres in size which comprises woodland, ponds, open wild grassy areas and gentle slopes. It is criss-crossed by numerous paths, both paths proper and narrow tracks, therefore any attempt to describe a detailed route would be pointless. However, this route description features Parliament Hill and the ponds by way of a roughly circular route without any unnecessary backtracking.

The ponds fall into two main categories. Three ponds to the south west are known as the Hampstead Ponds while to the east, another eight ponds, six of them strung out rather like beads on a necklace are the Highgate Ponds. A couple of other ponds are each comparatively isolated from the rest and require a bit more effort to find, though they are just a few minutes walk apart from each other.

Start at Hampstead mainline station to the south west of the heath and head north to follow South End Road, leading to Heath Road by way of a tarmac path which borders woodland on the right before the heath comes into view, also on the right. Bear right here and the first of the ponds, Hampstead Number One Pond appears on the right, overlooked by houses on the far side as you look. Follow the path ahead and two more ponds appear in quick succession, Hampstead Pond Number 2 and the Mixed Bathing Pond. Cross the road between these two ponds and walk up through woodland to the right which shortly leads into the open and the path ahead leads to the top of Parliament Hill (322 feet high). On a hot summer's day, you may see as many as a hundred or more people here enjoying the view and the sunshine and this is, in any case, a popular spot with kite-flyers. The most notable view is to the south east where some of the main London landmarks appear including the London Eye. Another fine view is to the north east towards the Highgate area and this is the direction to go next, down the hill.

At the foot of the hill, six ponds line up in a row with another two not much further beyond. There are separate mens and ladies bathing ponds. Some of the names of the ponds are similarly self-explanatory like the Model Boating Pond and the Bird Sanctuary Pond. If you follow the path between these two ponds, it goes uphill with public conveniences on the right. Turn left here and the route passes the Kenwood Ladies' Bathing Pond on the left, then Stock Pond, which is largely obscured by trees. The path emerges into the open and becomes a tarmac path going uphill. Near the top of this hill, an open metal gate on the left provides access to the Kenwood Estate. On entering the estate, Thousand Pound Pond appears, at the foot of the grassy hill ahead, and notable for its "Sham Bridge". Nearby to the right of it is Wood Pond, and this one has a real bridge at one end. Overlooking these two ponds on a grassy hill to the right is the stately home of Kenwood House. These two ponds are shown as Lily Pond and Concert Pond on Streetmap (website). On closer acquaintance, Wood Pond is found to have a round island close to the shore with silver birch trees. The pond is also home to various water birds, Heading due southwest past Wood Pond, take the path to the right and then left though semi open woodland to West Meadow. A track through trees takes you out of the Kenwood Estate and a noticeboard map reveals that this point is called Beech Mount. There are various paths heading off in different directions through woodland at this point and a compass may be useful to navigate since there are no obvious visible landmarks. A south westerly route brings you to an area of open grass and then a path beyond this point leads through trees to the Vale of Health Pond. Some trees overhang the water on the right of the path with some tree roots being in the water itself. The Vale of Health Pond is one of the prettier ponds on the heath with its islands and bird life. The pond takes its name from the nearby hamlet of Vale of Health. On reaching the far end of the pond, shortly after this, a narrow path to the left down through woodland brings you to Viaduct Pond after a short steep rise up a hill and then down again the other side.

Viaduct Pond is overlooked by, fittingly enough, a viaduct at one end and a cycle route goes this way. One route option from here is to take a narrow path through trees due south east which shortly reaches one of the main paths through the heath at a T junction of paths. A right turn here uphill through the woods brings you to East Heath Road and a left turn leads back to Hampstead mainline station.