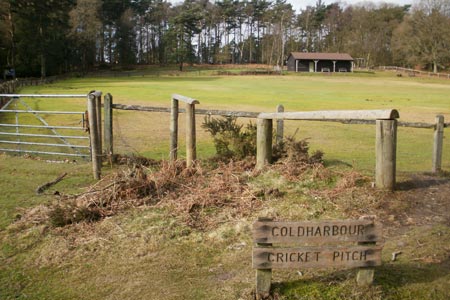 Leith Hill (965 feet) and Box Hill (735 feet) do not normally appear together in the same sentence, or the same walk; rather they tend to be done as separate walks. This is a linear route which I have devised and a large part of it is covered by public footpaths. Leith Hill is the highest hill in Surrey and features in a chapter in the Ramblers' book, "Walk Britain: top 50 walking routes to Britain's finest views"

A car park at the top of Box Hill provides ease of access to see the view overlooking Westhumble and beyond without the effort involved in climbing up the hill. Similarly, a relatively easy way of visiting Leith Hill is by walking there from a nearby car park. However, this is a more demanding walk of a linear nature, and one way of organising it, is to use the railway line, by starting at Holmwood Station on the Sutton and Mole Valley line, which is a couple of miles to the east of Leith Hill, and finishing two stops further up the line at Box Hill and Westhumble Station. Alternatively, leave your car at Westhumble, take the train to Holmwood, then do the linear route as described here.

The route on this walk includes sections of two main walking routes, the Greensand Way and the North Downs Way, connected by the Greensand Way link path at the village of Westcott. The two hills are featured in the relatively early and late stages of the walk with a span of several miles separating the two. Much of the route is through woodland or open countryside and landscape views are frequent during much of the walk. The route passes a number of water features including several ponds, a stream and some man-made cascades. Wearing boots is definitely recommended as a number of sections of path are muddy. While gradients are mostly gentle, there are some steep sections, one of them being the height gain between the railway line north of Westcott and the North Downs Way, but the length of this section pales compared with the later climb up Box Hill which involves several steep sections with wooden retainer steps. Therefore, one slight disadvantage of the route is that the hardest part of the walk, the fairly stiff climb up Box Hill, comes in the latter stages. Or the route could be done in reverse.

Start at Holmwood railway station and turn left along Old Horsham Road, taking the first public footpath on the left which leads to a secondary road, Moorhurst Lane. Take the right hand lane at a fork in the road, going gently uphill. A pond appears among trees in a field on the right and the road becomes a path which enters woodland. Take the next signed public footpath on the right up through fields and later woodland. Initially there appears to be no path up the grassy slopes, but a wooden stile on the edge of some woods indicates the way ahead. The route continues beyond Anstiebury Farm to Anstie Lane. Turn right here and then left at the T junction soon afterwards at Abinger Road, signposted Coldharbour and Leith Hill. Follow the road ahead to some houses and a pub where a secondary road off to the right reveals a sign indicating that the way up through the trees is for the tower and cricket field. The Coldharbour Cricket Pitch is reached first, an unusual setting for a cricket field, as it is part way up a hill amid open heathland and bordered by Scots pine trees. Despite the height of Leith Hill and its tall tower, neither of them is seen until you are within about fifty yards of the top. Instead, follow the path beyond the Cricket Pitch to the right of a noticeboard which meanders between trees, gorse and open heathland until you reach a crossroads of paths, revealing the name of the woodland just passed through to be Duke's Warren. This point marks the final approach to Leith Hill, up a fairly steep slope which, when the gradient eases off, reveals the distinctive 18th Century Gothic tower ahead. The tower is open to the public at certain times for a small admission charge. If the view from the top of Leith Hill appears good, the view from the top of the tower is even better as it has the advantage of being higher than the tree tops. In good visibility, fields and woodland of rural Surrey dominate the view south while to the north it is possible to make out some of the London landmarks on the distant horizon beyond the ridge of the North Downs Way which features later in this walk. The trees are a mixture of evergreens and deciduous trees with silver birch and scoots pine being especially noticeable. The tower also has a couple of small information display rooms with some interesting facts about the history of the area as well as the local flora and fauna. This is a popular spot with cyclists and families with young children, with two car parks nearby offering easy access for the latter.

To continue the route, go back down to the crossroads and now bear left by following the sign for the Greensand Way to the north. The first mile or so passes through woodland with a sloping hill on the left but various features of possible interest are passed later including the springs which are the origin of the Tilling Bourne stream which is passed later while a series of cascades descending to a pool appear on the right soon after Home Farm. Two more ponds are passed on the approach to the Rookery and a house with a thatched roof. Just before you reach Guildford Road, the Greensand Way continues up through trees to the right, named as Westcott Heath on Streetmap. Keep an eye out for a sign indicating that the "GW" (Greensand Way) is both straight ahead and to the left. Take the path to the left down into Westcott and after crossing the busy main road, follow the pavement to the left and a public footpath sign to the right shows the way to go next. This is a link path leading to the North Downs Way and it involves crossing a railway line. Soon after this point, there is a significant height gain that gets steeper, the higher up you get before reaching the North Downs Way. Looking back, the tower of Leith Hill can just be made out on the tree-covered horizon.

Now follow the signs for the North Downs Way due east, the route not always being immediately obvious as you need to cross a road at one point and then follow along another road past a church on the right before the route continues as a footpath. Descending to Westhumble the route reaches the Stepping Stones Car Park and this is the start of the climb up Box Hill, after crossing the stepping stones across the river. At the top of Box Hill there is a car park, shop and public conveniences and there is a fine viewpoint nearby especially looking towards to the south east. To complete the walk, return down the same path and walk into the village of Westhumble and the railway station.