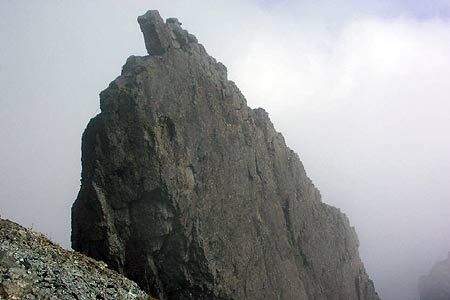 This walk takes in the most difficult Munros in Scotland, the Inaccessible Pinnacle and Sgurr Mhic Choinnich. It is a difficult mountain route an should only be attempted by those experienced in mountain terrain and with the right equipment. Please note the attached GPS file should not be used for micro navigation and only used for general guidance about the route.

Start from Glen Brittle SYHA hut. The paths across the moor to Coire Lagan and Sgurr Dearg were once a boggy trampled mess. However in the last few years, they have been extensively improved with drainage and scalpings to provide a properly consolidated surface which is not subject to erosion from the boots of the thousands of walkers which pass that way each year. The scars on the moorland caused by the old path are now starting to heal.

The path passes the spectacular cleft carved into the moorland by the Eas Mor waterfall, then starts climbing south east over grassy moorland. Before you reach Loch an Fhir-bhallaich, branch off left and climb steeply up the west ridge of Sgurr Dearg. As you get higher up the mountain, views open out of Rhum and later, Eigg. The Hebrides are easily visible in the distance. The south side of the ridge is broken by a couple of very deep clefts in the mountain. The last of these provides an extremely steep but walkable escape route down to Coire Lagan.

Continuing up Sgurr Dearg, you need to do a little easy scrambling in places to reach the top, but nothing requires any real exposure. Once on the mountain the going is unremittingly steep and the path only starts to level out just before you reach the top of Sgurr Dearg. The top of Sgurr Dearg is a rocky crest, which falls away in cliffs on the north side and also slopes away steeply down to Coire Lagan. The route you have just come is the only reasonably straightforward way up and down. But the real prize of this walk is the Inaccessible Pinnacle, which is the actual Munro summit.

The Pin is a narrow fin of rock which protrudes from the south side of the summit of Sgurr Dearg, and actually only overtops it by 8 metres. Here lies the end of many a Munro bagger's ambition to climb all 284 Munros. The Pin is rated as a Difficult Rock climb, requiring two 30 metre stances from the southern end. The first stance is steeper and more technical, the second is generally a series of large square blocks, for which long legs help. The top of the Pin has changed in appearance recently due to a lightning strike in Winter 2007. The famous Gendarme remains, but there is now a massive crack along the bottom and the ledge along the east side of the Gendarme is now narrower than it used to be. There is still plenty of space to sit and admire the view, and maybe allow yourself a little self congratulation for having conquered Scotland's most difficult Munro. Most people will abseil off the north side, which is only about 20 m down to the ground.

The infamous roughness of the Cuillin is due to the volcanic rock on which the mountain range is based. The predominating types, gabbro, dolerite and basalt are actually all chemically identical, and the roughness of gabbro is due to the large crystals, formed by the slower cooling of the molten rock. Basalt, in contrast, weathers very smooth and is very slippery when wet. The Cuillin is also remarkable for the almost complete absence of vegetation from the higher slopes. However some tiny alpines do manage to cling to crevices in the rocks and some, like alpine rock-cress, aren't found anywhere else in the UK but the Cuillin.

Continuing from the Pin, go down the south west side of the narrow crest linking Sgurr Dearg to Sgurr Mhic Choinnich. Care is needed here because of the large amount of loose rock. You come out at the 800 m low point between the mountains. Continue up the west side of Choinnich. The route eventually winds round to the north side of the ridge, giving fine views of the barren interior of the Cuillin. From the bottom of Coire Lagan, the north side of Choinnich does not look particularly steep, but you will not manage it without quite a good deal of help from your hands. There are a couple of steep blocks which need to be scrambled up, and a couple of large sloping slabs which need a great deal of care, but none of the ascent requires any sustained technical climbing or serious exposure.

The top of Choinnich is a tiny eyrie. It boasts a carved marble inscription, already weather-worn, in loving memory of Lewis MacDonald, a local climber. Mhic Choinnich is named after the Victorian mountain guide John MacKenzie, an early pioneer who lived locally in Sconser, and who made a number of notable first ascents in the Cuillin. The Cuillin ridge is broken here by a steep plunge down to the famous Collie's Ledge before Sgurr Thearlaich rears up in the very near distance. The section from Choinnich to the top of the Stone Shoot below Alasdair via Thearlaich is the most difficult section for those attempting the entire ridge. Choinnich also provides fine views of the Dubhs, the southern end of the Cuillin. From a distance they look particularly rough. On the ground they are, the coarsest that gabbro can get, real boot wreckers of mountains.

The descent to Coire Lagan is back to the 800 m low point, then down a scree run into the corrie, very similar but less extensive than the infamous Stone Shoot off the Sgurr Alasdair. Cross Coire Lagan and join the network of paths crossing the corrie on the way back to the moorland below, where you rejoin the outward route.

Warning - This walk includes some difficult mountain paths in an area known for unpredictable weather. Although the distance and ascent are not great, this is a very full day walk which should only be attempted by experienced walkers who are also confident scramblers and have the skills and equipment to do the rock climb on the Pin. If in doubt - do not attempt this route.

Inspirational guidebook to 50 challenging routes for mountaineers, scramblers, hillwalkers and fell runners, many long enough to backpack over 2 days, especially in winter (12 to 25 miles). A mix of classic routes and unsung gems across Scotland from Galloway to the Outer Hebrides in widely differing wild landscapes. With customised OS mapping.
More information

Walking the Munros Vol 2 - Northern Highlands and the Cairngorms

Guidebook to walking the northern Munros, covering the northern Highlands, the Cairngorms and the Isle of Skye. 70 routes are described, including those up Ben Macdui, Braeriach and Cairn Gorm. Routes range from 7 to 46km, requiring a fair level of fitness. The second of two guidebooks to walking Scotland's Munros: peaks higher than 3000ft.
More information

Highland is an administrative area which contains most of the Scottish Highalnds. It is sparsely populated and contains some of the finest scenery in the British Isles. High Mountains, deep glens and lochs contain many great walks. The area includes Ben Nevis the highest mountain in the UK. The area also includes part of the Cairngorm National Park, an area of high mountains, and glorious Isle of Skye.