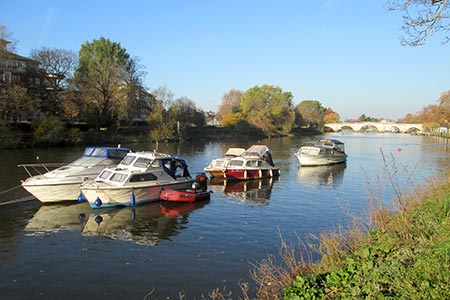 Richmond tube station in Zone 4 of the London Underground at one end of the District Line is the start and finish point for this walk. The main object of it is a circuit of Richmond Park which involves a walk by a scenic section of the River Thames on the way out and back. I did this walk in the autumn of 2018, a bright sunny day with lovely autumnal colours and I was struck by both the vastness and the beauty of the park especially the section along by Beverley Brook but also the various sights of deer, both red and fallow.

Cross the main road outside the station, The Quad, at the traffic lights to the left of the station exit and, follow an alley on the other side of the road that links with another more minor road, Little Green. Turn left here and soon the green expanse of Richmond Green appears ahead. Walk across the green and at the far side, follow Friars Lane to reach the river and turn left. Keep following the path ahead, part of the Thames Path, to cross Petersham Meadows. This path leads away from the river, unlike another path which runs alongside it. Passing a church en-route, turn left at the next road and cross it at a set of traffic lights. Now enter the park at Petersham Gate and take the first path going diagonally uphill to the left. At the top of the hill, follow a path to the right leading past Pembroke Lodge.

Exit the grounds of the lodge via a gate with signs for the Capital Ring appearing on the right. Now follow a track ahead roughly due south east as far as a crossroads. Cross the road to the left here and take the next wide track, also heading roughly south east, until you have almost gone as far as a road ahead. This track is shown as Horse Ride on Streetmap. Approaching the Ladderstile Gate, turn left along the track here now heading approximately north east. Again, Streetmap shows this way as "Horse Ride". Continue to follow the path ahead as it goes quite steeply downhill at one point (Broomfield Hill) and leads you to the Robin Hood Gate. As a point of note, the Capital Ring route from the Wimbledon Common direction enters Richmond Park at this juncture where there is a car park and a tarmac road running across the park.

Crossing the car park, continue ahead, but instead of continuing along the perimeter of the park towards the golf course, having reached the shallow clear stream called Beverley Brook, follow the stream, bearing left initially with the stream on your right and continue to follow it all the way to Roehampton Gate. This is part of the Beverley Brook route between New Malden in Surrey and Putney in London and is one of the more scenic parts of Richmond Park.

Heading away from Roehampton Gate, follow the path to the Sheen gate, passing Adam's Pond. Next pass Two Storm Wood on the left. There are different paths that lead to Richmond Gate and the park exit from here. On exiting the park, having crossed the busy main road, follow the pavement ahead to where the view of the river from Richmond Hill comes into view. From here take a grassy path down the hill, cross the road at the foot of the hill and re-join the river path to reverse the outgoing part of the route back to Richmond station.