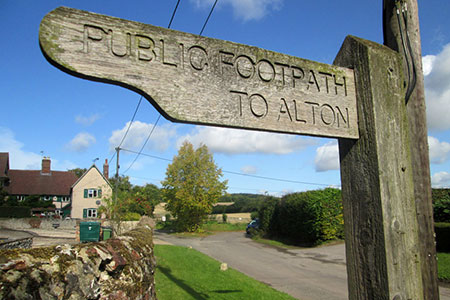 This walk follows part of the 34-mile St Swithun's Way (SSW) between Winchester in Hampshire and Farnham in Surrey. It also coincides with part of the much-longer 141-mile Pilgrim's Way. The route is generally waymarked with the SSW symbol, a green arrow on a white circular disc. It can feel like a surprisingly long walk for the south of England even though much of it is across fields and farmland and along country lanes, mostly on the level though there are some hilly sections especially in the last few miles on the approach to Farnham. Three old churches are passed en-route and the village of Upper Froyle is in an attractive setting while deer may occasionally be in the distance. There is a choice of refreshment places at either end of the route but in between there is just the one pub, the Anchor, near to Lower Froyle.

Starting at Alton railway station, cross the car park to the busy main road of Anstey Road. Turn right and then left along Nursery Road. After about a hundred metres, the waymarked St Swithun's Way is indicated down an alleyway after a row of garages. Keep following the route ahead to cross a few more roads and Anstey Park appears ahead. Cross the rugby fields ahead to locate a path between hedgerows to the left. Follow this path and then continue when it switches to the right to border the grounds of a nearby school. Keep following the path ahead until you reach a road, Howard's Lane. Turn left along the road and then follow it round to the right, passing the first of the three churches on the right, Holyrood Church. Continue ahead with some houses on the right and next the route borders a hedge on the right with fields on the left. After about a kilometre, Round Wood is reached though - despite the name - it appears long and narrow. Continue ahead with the wood on your left and at the end of the next field. The route passes through the wood briefly before continuing at a tangent across the next field with a giant pylon on the left. At the end of the next field, the village of Upper Froyle is seen ahead, on the other side of a dip. Continue down into the dip and up the other side as the track reaches a tarmac road that leads into the village. Turn right at the village green, then ahead at the next junction, the road leading to and past the second church on the walk.

After passing the church, the route leaves the road before a house with ivy growing on the side of it over a wooden stile and across a field, then left along a tree-lined avenue, passing the diminutive Froyle Park Pond in a field on the right to reach Vid Lane, a narrow country lane. The route then crosses fields ahead to reach the Anchor pub. From the pub, turn right along the road and then left past a house at Coldrey. When the lane bends round to the right, the SSW leaves the road to continue along a path ahead across a field and on to a narrow country lane via a wooden stile. Turn left and ahead is a distinctive sign for Pax Hill Nursing Home. Take the next path sharp right, more or less opposite the sign and within a quarter of a mile, the next country road is reached at Bentley. Turn right and then almost immediately left to reach the third and final church on the walk, reached via a yew-tree lined path.

From Bentley Church, follow the lane downhill and turn left at the next junction. Follow the road ahead and when the road starts to bend round to the left, take the next signed public footpath on the right across fields past Marsh House on the right and another minor road. Cross this and pass the houses of East Green, turning left at the next road junction and then look out for the next SSW way marker indicating a forest track to the right. This track leads to a T of paths and the way ahead may not be immediately obvious but here a right turn and then left over a wooden board footbridge across a stream leads to a path up a sloping field and across another field on the level before the next road is reached. Turn left here and then take the next path on the right. Keep following the track ahead as far as Dippenhall Road. At the next T junction, turn left and then almost immediately right. Next follows a section of road walking where you need to keep an eye out for cars and keep to the roadside. But respite follows shortly when the road bends sharp left and the SSW continues ahead down a narrow country lane that sees very little traffic. The route now winds its way down and up past Lower Old Park and Middle Old Park. At the next route diversion, take the bridleway going downhill slightly south east of east to pass Park Farm. Then turn right at the next T junction shown as Old Park Lane on Streetmap, though it is not immediately obvious what the name is when you are there. The houses of Farnham start appearing and, before you reach a T junction ahead that joins with a busy road, take a narrow path to the right which switches left downhill past a college and into Farnham, the railway station being the other side of the very busy Farnham bypass up Station Hill.