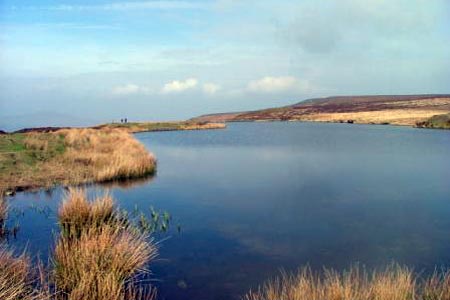 The Iron Mountain Trail is a unique opportunity to explore the wonderful landscape of the World Heritage Site which is situated between the towns of Blaenavon and Abergavenny in the South East corner of the Brecon Beacons National Park in South Wales. This spectacular trail follows the routes of former tramways, inclines and footpaths linking many of the historic features which make this landscape of World significance. The route winds its way through the landscape past many sites referred to in Alexander Cordell's 'Rape of the Fair Country' such as the site of the Garn Ddyrys Forge.

This is a circular walk that can either be treated as a separate walk or can be combined with Part Two (Walk 1512) to give a 16.5 km, 10 mile circuit of the major sites of the Blaenavon Industrial Landscape World Heritage Site. Both parts of the trail start from the Keepers Pond Car Park (also known as Pen Ffordd Goch) at grid ref. SO254107. Parts of the trail are across open mountain and rocky areas so please ensure you have warm and waterproof clothing. Good walking boots or shoes are essential.

Starting from the Keepers Pond Car Park, follow the stoned footpath that goes around the outskirts of the pond to the interpretation panel at the end of the path. Keepers was the final of three reservoirs or ponds built to supply water for the forges and works of Garn Ddyrys. At the information panel, turn down to your left, (crossing a wooden footbridge and continue to bear left) along a rough path that takes you down onto the road. Cross over the road and follow the footpath that curves to the right around the head of the valley of Cwm Ivor. About 100 m from the road the path forks at a large grey limestone boulder set in the grass. Take the right hand path that heads down hill along an old parish road known as Rhiw Ivor) Shortly after passing a rocky outcrop on your left, the path comes to a junction where Rhiw Ivor crosses Hills Tram Road, turn right and crossing the head of the Cwm Sienkin brook, continue along the tram road towards Garn Ddyrys.

This tram road, named after the Blaenavon ironmaster, Thomas Hill, was constructed around the 1820's and was built to connect the Blaenavon Ironworks with the canal at Llanfoist. About 20 metres along from the brook, on the right there are the remains of a building that may have housed a blacksmiths shop (although it is also known as the Tumble beer house!). Continue along the track, looking for the large misshapen pile of forge slag to your left. After about ½ km and just before you walk between what appears to be two long mounds, the long mound on your right is actually a retaining wall for the Lower pond. As the track turns to the right, in the distance are the distinctive Sugarloaf and Tabletop mountains: beyond that, on a clear day can be seen Pen y fan and Fan y Big of the Brecon Beacons.

As the track turns up hill, to your right is the rectangular depression of the silted-up lower pond. Do not continue up the hill, turn left and walk between a high bank on your right and a fence on your left. You are now walking through the site of the Garn Ddyrys foundry with the overgrown foundations of the furnaces, forges and other buildings all around. The slope to your right is topped by the ruin of the retaining wall for the Upper pond that supplied water to the forge steam engine. Water could be fed directly from this pond into the steam engines' boiler from an outlet that can still be seen in the upper part of the retaining wall, or fed to the lower pond by way of a stone lined culvert. The furnaces and forges butted up to this slope on the right and on the left are the foundations of a house and what remains of the sites waste heaps. Garn Ddyrys processed the "Pig" iron from the Blaenavon Iron Works, producing a less brittle, more malleable product. The site was only productive for about 50 years and in the 1860's its machinery was dismantled and moved to a new site at Forgeside, Blaenavon.

Head for the pair of wooden electricity poles ahead of you, skirting around to the right of the stone wall continue to the right hand side of the poles, then follow the green track up onto the road. Cross the road and bear left up the grassy bank, keeping the stone walls on your right and the road on the left. Head towards a ruined stone enclosure about 40 m ahead of you, cut across the left hand corner of the enclosure and then make your way carefully down to the Hills Tram Road below. The stone walls and brick rubble around you are all that remain of the part of the village known as Garn Ddyrys Row. In 1851, a few years before the closure of the plant, the census recorded a population of 300 people living around the forge.

On the tram road once again, you are passing (on your left) the site of a pub called the Queen Victoria Inn, a pub where, in 1946, a lively party caused the floor of the bar to collapse, depositing the clientele into the cellar below. As you walk along the track, look for stone sleepers that would have held the tram rails plates in place. Further along, you will pass to the left of a "cut and shut" tunnel that would have been constructed to protect this section of the tram way from ground slippage and loose rock. Please do not enter the tunnel as it is a scheduled ancient monument. About ½ km further on the path narrows and turns more sharply to the right, taking you into the hollow on the north face of the Blorenge, to the right are the remains of a building built into the bank.

You are approximately at the site of the winch house at the top of the first section of the three stage incline down the Cwm Craf valley to Llanfoist. The wooden trams were attached to continuous chains which passed around a brake wheel. The full trams descended under gravity, pulling the empty or trams back up the hill. Once at Llanfoist wharf, goods could be sent to Brecon or Newport on the canal or onto Hereford on the Llanfihangel horse drawn tram road.

Continue on the path as it skirts around the stone walls and down the hill. As you continue around the side of the mountain, take in the views of the town of Abergavenny. The building with the distinctive green copper roofed clock tower is the Town Hall. Eventually, you will come to wooden gate that gives you access into a Woodland Trust reserve, continue on down the path and you will come to a small lake called the Punchbowl. This is not a natural feature, the water being held back by a man made earth dam across which the path goes. The steep walls of this wooded hollow were formed as a result of glaciation and are now a favourite haunt of green woodpeckers and buzzards. In the past, this secluded spot was a venue for illegal bare knuckle fist fights! Continue up the path as it follows the line of an old stone wall and ancient beech hedge. After going through the gate at the top of the path, continue straight ahead and through another wooden gate at the metalled road, turn right at the end of the walled wooded enclosure and follow the path as it climbs uphill. [Should you wish to take a slightly easier route, continue along the road until you reach the Foxhunter car park by the twin masts. Be aware that whilst this road is not very busy it is narrow with poor visibility so be vigilant for vehicles.]

The path bears right, then steeply uphill away from the wall for about 120 metres, where the wall turns back towards the path. From this corner of the wall, continue straight up the hill and after about another 200 metres the path meets a sunken track. Turn right into this track and continue on until this leads you up onto a wider grassed track. This would be a good opportunity to catch your breath and take in the view of the Usk Valley. On the left is the Ysgyryd Fawr (the big Skirrid). This hill is easily identified by the prominent landslip on its left slope, about which there are many legends, one being that Noah's Ark sliced through the hill when the flood was receding. During the Iron Age the top of the hill was fortified and in later years a small medieval chapel was constructed at the summit of the Skirrid as it was believed to be a "Holy" mountain. Turn right and follow this track as it comes up onto one of the many false summits of the Blorenge Mountain. There are many little grassy hollows, pits and spoil heaps on either side of the track, evidence of where the local stone has been "quarried". The limestone would have been used for agricultural purposes or for iron making whilst the conglomerate or pudding stone was used for millstones.

Pass to the left of a small brick building once used as a wireless hut, going through the heather on a rough path, the path goes up and over another false summit from where you can see the trig point ahead of you. As you climb, the underlying layer of the quartz studded conglomerate stone is clearly visible. Continue on to the trig point, the true summit of the mountain. To the right of the concrete pillar is a much older stone cairn that marks the remains of a Bronze Age burial site. Go to the left of the trig point and follow the path as it heads towards the twin masts in the distance. Just before you reach the Fox Hunter Car Park (grid ref. SO263107), as you pass a jumble of lime stone rocks, take a short detour to visit the memorial for the Olympic gold medal show jumper "Foxhunter". Cross the road and take a path to the right of the masts. After about 700 m, either continue onwards with Part Two of the Iron Mountain Trail or turn right into a small valley (caused by miners "scouring" out iron ore with water) and along a path cut in the heather. Cross the road and walk down the grass verge back towards the Keepers Pond Car Park. On the eastern side of the car park, further scoured out valleys can be seen.

The Dragons Back
Pengenffordd
12.7 miles / 20.4 km away
* Featured Supplier