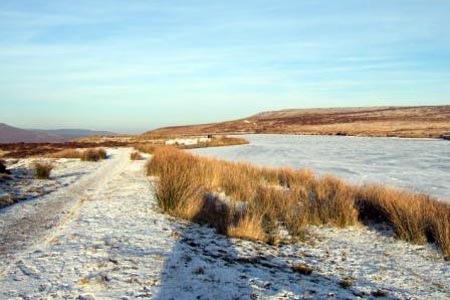 This is a circular walk that can either be treated as a separate walk or can be combined with Part One to give a 16.5 km, 10 mile circuit of the major sites of the Blaenavon Industrial Landscape World Heritage Site. Both parts of the trail start from the Keepers Pond Car Park (also known as Pen Ffordd Goch) at OS 254 097. Parts of the trail are across open mountain and rocky areas so please ensure you have warm and waterproof clothing. Good walking boots or shoes are essential.

Starting from the Keepers Pond Car Park and turning left at the entrance, walk along the grass verge. Bear left at the road junction and then cross over after about 20 metres, then along a path cut in the heather that eventually takes you down into a small valley, probably caused by the early miners in search of minerals.

Where the iron ore lay close to the surface, small dams were built and local springs and issues formed small ponds. Once enough water was collected, a sluice gate would be lifted to allow the water to "scour" away the loose topsoil and expose the ore. Turn right when you reach a fairly well defined track and follow this as it makes its way towards the Blaenavon Road. Go around the vehicle barrier and through the kissing gate next to the cattle grid then turn right and follow the fence line until you get to another kissing gate at the corner of the football field. Continue along the left hand verge of the road until you are about 10 metres to the left of the drive to Wyndee Kennels opposite you, cross over onto a grassed track. The path goes to the right of twin wooden electricity poles, then bears left between the poles and a hawthorn thicket. Look at the wall to your right, and you will see it is built almost entirely of Bessemer Tuyeres.

"Tuyeres" are round perforated bricks that were built into the base of a Bessemer converter. Hot air was blown through them into molten pig iron, converting it into steel by removing the irons impurities, either as a gas or in a lump of solid slag. The houses to your right are all that remain of the Upper Brickyard. Bricks were an essential part of the iron making process as they were used to line the furnaces; a constant supply was needed as the bricks wore away or cracked during constant use.

Just before you reach the corner of the wall take the path as it forks to the left, keeping the small wooded copse and another twin set of electricity poles to your right. As you come out into an open space you can see across the valley to the community of Forgeside with Big Pit further to the right. Continue to follow the path as it goes through a belt of trees, straight across the first path then right onto the second path at the Rifle Green Car Park (SO 251 094). This car park is on the site of two former terraces of industrial workers housing called bunkers row.

Cross the road and walk down "Stable Row" lane, bearing to the right as the route goes between the garages. (If you wish to visit the Iron Works, continue down this lane until it meets the Abergavenny Road, turn right and follow the pavement around to the entrance.) Go through the kissing gate and continue straight on. After about 70 m on the left is the rear of the Iron Works with a good aerial view of the site. Go right through a second kissing gate and bear left alongside the fence.

Over to your right, beyond the playing fields, is the site of possibly the first ever railway viaduct which became known locally as the "Covered Bridge". Built in about 1790 to get coal over the small steep sided valley to the blast furnaces at Blaenavon, the bridge was about 40 meters long and 10 high with a "roof" over the rails and houses built into the arches to accommodate the influx of workers to Blaenavon. Within 25 years it had "disappeared" as there is no record of it being demolished or dismantled. In 2001, the Channel 4 Time Team came to Blaenavon to try and locate the site of bridge.

Proceed over another stile and then continue up onto the road. Turn left and walk along the road for about 350 metres until you are opposite a bus stop. Cross the road and take the track that is to the left of the stop, continuing up the slope and through several gates. You are now walking through the spoil tips of Hills Pits, a mine sunk in the 1830's to extract iron ore and coal for the Blaenavon Ironworks. The path goes to the left of beautiful stone stack which was the chimney for the pits steam driven winding engine. Bear left at the chimney then after about 600 metres the path turns right onto the Dyne Steel Incline. Dyne Steel Incline was constructed in the 1850's by Thomas Dyne-Steel, and was a double incline over the hill from Blaenavon to Garn Ddyrys, driven by steam. It replaced the horse drawn tram road that went through a tunnel at Pwll-du.

Walk up the incline to the top of the ridge. As you come up to the summit, on the left are the ruined stone walls of the winding engines' building. Continue over the top of the ridge then as you go down hill, bear to the right of a square redbrick building that once housed generators. Remain on the track as it goes downhill until you reach the road opposite the Lamb and Fox Pub.

You are now in Pwll-du, once a thriving village which in its heyday had over 300 residents, two pubs, two chapels, several bake houses, a school and a shop. By 1960 it was declared a slum with most of its residents being relocated down the valley into newly constructed council houses in Govilon. Once the houses were emptied, they were demolished. Away to the left, down in the valley, are the entrances to the Pwll-du tunnel that wound its way 1 ½ miles through the mountain to emerge at Garn yr Erw. The tunnel entrances are now scheduled ancient monuments.

Cross the road and go through the kissing gate to the right of the pub, proceeding on through the next kissing gate and then through a boggy area using the stepping stones. Continue on to the left hand side of a rectangular shaped enclosure that is the remains of a balance pond. The water once stored in the pond was used to operate a counter balance lift that raised and lowered trams through a vertical shaft cut into the face of Pwll-du quarry. Walk along the top of the bank of the ponds' retaining wall to the end. At this point you can either turn right, returning along an easier route to the Keepers Pond Car Park or turn left and take the zigzag path down onto Hills Tram Road then turn right to Rhiw Ivor where you could link with Part One of the Iron Mountain Trail.

The Dragons Back
Pengenffordd
12.7 miles / 20.4 km away
* Featured Supplier