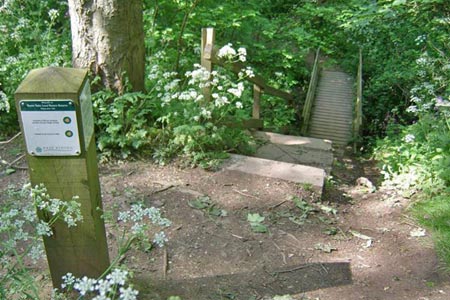 With the North Yorks Moors so near it is easy to be a bit dismissive about East Yorkshire but a walk around Flamborough Head should serve to demonstrate that parts of this coast are as fine as anything further north. Park in Flamborough on Chapel Street (grid ref TA227706) where there is plenty of on road parking and the luxury of public toilets too.

Walk south down Tower Street, then follow the main route out westwards on Church Street and then Bridlington Road. At Water Street turn off left then take the fenced path off as the road bends round to the left - it is signed to Dane's Dyke. The path meets the corner of the Needles Plantation where a path is signed through the trees to the Dane's Dyke nature reserve.

After half a mile in the trees you come to a fork in the paths and it is worth taking the right hand one down, then over the dyke on the footbridge. It gives some feel for the extent of this defensive dyke that stretches from coast to coast across the Head. Take the path to the left then rather than going to the parking/café keep on downhill to the beach. There are views eastwards along the cliffs and westwards to Bridlington.

Retrace your steps then take the steps up the cliffs on your right. From here it is 7 miles around the headland with some great sights on the way round - South Landing, Cough Hole, the Fog Signal Station and Lighthouse, Breil Nook, North Landing and Thornwick Bay. If you go in late spring or early summer the bird displays and noise is stunning.

After you have passed the Thornwick Bay café and continued west of the holiday/caravan park there is a path signed inland before Close Nooks which follows the fence next to the holiday park all the way back to Woodcock Road and then Chapel Street.

A walking guidebook to the Cleveland Way and Yorkshire Wolds Way National Trails, plus the Tabular Hills Walk. Crossing the North York Moors National Park, coastal scenery and quiet countryside, the three routes can be joined to create an easy circular route of over 250 miles (400km). Includes a 1:25,000 scale OS map booklet of the Cleveland Way.
More information

The Yorkshire Wolds are chalk hills that run in an arc from west of Hull to the North Sea coast south of Bridlington. At their eastern end the Wolds produce the high cliffs rising to 420 feet above the sea east of Speeton. To the south the Yorkshire Wolds continue across the River Humber to the Lincolnshire Wolds which have a similar geological character. Most of the Yorkshire Wolds lie in the county of East Yorkshire although some of the hills at western end are in neighbouring North Yorkshire. More Information