Warning: mysqli_fetch_array() expects parameter 1 to be mysqli_result, null given in /var/www/vhosts/walkingbritain.co.uk/httpdocs/walk-description.php on line 91
 Blackstone Edge and the Pennine Way without a car - South Pennines Walk 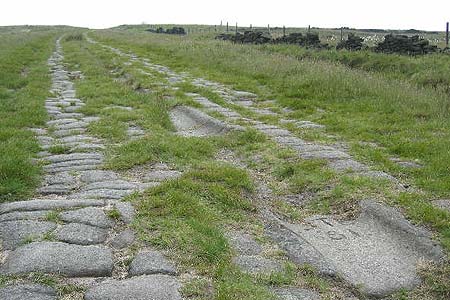 A lack of public transport means that for much of its length, a linear walk on the Pennine Way is not a practical proposition without the use of two cars. However, the section between Hebden Bridge and Standedge is an exception and this walk makes use of the excellent local bus network. It visits both old and new transport routes, dating from the Middle Ages right up to the present time.

The walk starts at the White House PH on the A58 between Littleborough and Ripponden (Grid ref. SD968178). Go down the hill on the road for 100m, cross over and turn left up a track with a Pennine Way waymarker. On reaching a reservoir channel after 100m, go right and follow the channel as it contours around the hillside.

A broad paved track crosses the channel after 900m (Grid ref. SD69169). Turn left on to it and follow the well worn stone paving as it climbs up on to the moor. This is the so called “Roman Road” over Blackstone Edge, although evidence suggests that it actually dates from a much later period. After 400m, a large stone pillar with an information board is reached at a path junction. Known as "The Aiggin Stone", it's a medieval guide post believed to be about six hundred years old.

Turn right at the stone and follow the clear route of the PW as it traverses the ridge along Blackstone Edge, offering a wide panorama over Rochdale and the West Pennine moors. After passing a trig point, the route descends gently on a much improved path to the M62 motorway and the repeater station at Windy Hill, a well known PW landmark.

After crossing the motorway by the modern footbridge, the A672 road is reached where a snack van can sometimes be found for those in need of refreshment (Grid ref. SD983141). Cross the road and follow the clear path as it crosses the moor towards White Hill trig point. The trig point offers the first views southwards towards Black Hill and the Dark Peak, a sure sign to southbound PW walkers that the finish of their trek is not far away.

At the A640 (Grid ref. SE002122) cross the road and descend 50m to a path junction where the PW is finally left behind. Take the left hand path which after climbing for some 200m, can be seen winding over the moors while extensive views over Marsden and West Nab open out in front. This path is an ancient pack horse route dating back to the Middle Ages although the stone guide posts inscribed "PH route" are somewhat newer, having been erected by Marsden Town Council in 1908 after a dispute with the landowner.

The path crosses the moor for 3K before descending steeply down Willykay Clough to Eastergate Bridge (shown as "Close Gate Bridge" on OS maps). A National Trust board provides information on this beautifully situated pack horse bridge believed to date from the 16th or 17th C. Cross over the bridge and follow the banks of the infant River Colne to a lane as the landscape changes from open moorland to a more pastoral scene.

Turn right and keep straight down the lane for 1K to reach the CAMRA listed "Tunnel End" PH (Grid ref SE040120). Directly below the pub, take the leftmost of two lanes which after 100m reaches a bridge over the Huddersfield Narrow Canal. To the right can be seen the entrance to the Standedge Canal Tunnel, while beyond are the railway tunnels dating from 1839. The canal tunnel is the longest in the country and took seventeen years to build before opening in 1811. Like many canals during the 20th C, it went into a spiral of decline and then closure, but happily it reopened in September 2001. Cross the canal and turn left on to the canal towpath to Marsden station where the walk finishes.

The start of the walk at the White House is served by First bus 528 which runs hourly every day between Rochdale and Halifax. In addition the less frequent First bus 900 between Huddersfield and Hebden Bridge stops at the A58 / B6139 junction 500m east of the start point. The finishing point at Marsden is served on weekdays by train and First bus 184 which both run hourly between Huddersfield and Manchester. There are a few trains to Huddersfield on Sunday while the 184 runs every two hours. Full details of all services can be found on www.wymetro.com.

Map of the 270 miles (435km) Pennine Way National Trail, between Edale in the Peak District and Kirk Yetholm in the Scottish Borders. This booklet is included with the Cicerone guidebook to the trail, and shows the full route on Ordnance Survey 1:25,000 maps. This popular long-distance route typically takes three weeks to complete.
More information

The Pennine Way - the Path, the People, the Journey

A portrait of the The Pennine Way, Britain's oldest and best known long-distance footpath, stretching 268 miles from the Peak District to the Scottish Borders. This personal, thoughtful and often humorous story of the path's remarkable history, includes the experiences of walkers and local characters on this exhilarating and complex path.
More information

The South Pennines stretch from the northern boundary of the Peak District to the southern boundary of the Yorkshire Dales. Consisting of high rolling moorland, intersected by deep valleys, there is nowhere in this region that exceeds 2000 feet. The moors and valleys are where the old rivals, Lancashire and Yorkshire meet and where too the rival industries of cotton and wool. More Information