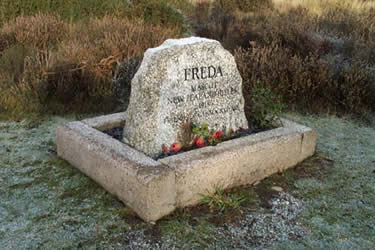 Start: The car park at Coppice Hill nearby the village of Brocton, which itself is about four miles south-east of Stafford just off the A34. Turn right at the village green in Brocton then immediately left uphill and, after climbing for around half a mile and passing the entrance to a quarry, bear left along another lane signed Coppice Hill and continue to the parking area right at the end. GR SJ979191.

Terrain: A glimpse of more recent history with a trail through the legacy of the Great War, mainly on well used paths over part of one of the premier areas of natural beauty in the Midlands. Some excellent views with a little climbing in parts, although nothing too taxing. The Chase tends to be heavily used at times, particularly on fine days at weekends so, if possible, go midweek. It also makes a superb winter walk but take care not to run out of daylight.

Refreshments: There is a cafe at Springside Lodge - see route plan.

The car park itself is located on a former training parade ground. From there walk back down the access roadway for about 100 yards, just past a direction indicator post on the left, and turn left through a smaller car parking area and out onto a grassy path. After a further 100 yards or so turn right at a junction. Look carefully to your right after another 100 yards to find Freda's Grave - the mascot of the New Zealand Rifles 1918. Freda was a Dalmatian and her collar and lead are kept in a military museum in New Zealand.

Continue on the path towards the road again and, on your left just before reaching it, the undulating ground marks the lines of the Women's Auxiliary Corps hut lines. Bear left on the road and after some 350 yards you will pass another parking area. Just beyond that note over to your left embankments marking the line of Tackeroo, the now dismantled camp railway, which linked the various buildings and service facilities. You will see much more evidence of this on other stages of the walk. Just after the parking area on the left is a long flat grassy area, underneath which is the concrete base of the Ordnance Store. Again the Tackeroo cutting is clearly visible to the rear and, in fact, there was also a station here where ammunition and uniforms were unloaded into storage.

Turn left across this flat area and out the back of it to arrive immediately at the Glacial Boulder which stands on the base of what was a huge Reservoir Tower which supplied water for the trains. The ice age boulder originates from Scotland and was placed here in the 1950s. To the rear is a trig. point and close to the rear of that runs a broad waymarked track where you will see there is a junction between the Staffordshire Way and the Heart of England Way. Turn right here, effectively joining the latter (not the grassy path to the sharp right). From here, on a clear day, there are views left over a huge swathe of countryside stretching up to North Staffordshire and the Moorlands. Keep right at a fork after 150 yards and at the waymarked crossroads in another 250 yards bear right again to follow a gradually descending track towards Chase Road Corner car park. Before getting there, veer off right on a narrower path down to the remains of the Coal Store. Daily rations of fuel for heating and cooking were issued from here with the railway high up to the rear to help unloading. Proceed now over to the car park and turn right to go through it for the short distance to the roadway. To your left on the raised area of ground once stood the Veterinary Hospital and the Officers' hut lines but, regrettably, most of what remains is obscured by undergrowth.

You don't actually need to join the roadway before veering off left down a waymarked track and following it for, perhaps a little over half a mile to a junction with a road with Springslade Lodge Cafe opposite. On your left here (opposite the caf6) is a narrow surfaced lane signed Katyn Memorial which you will reach after only 100 yards or so. This memorial is dedicated to the 14,000 members of the Polish armed forces and others who where executed in Katyn Forest in 1940.

From the Katyn Memorial re-trace your steps back towards the road but, 20 yards before getting there, turn left along a track, which initially runs parallel with it. Ignore a crossing path as the track climbs gradually then opens out with a clear view of the Telecom Tower ahead. You need to zig-zag right then left before going through a car park and out onto another track on the far side. On your left you will shortly see the embankments marking another section of Tackeroo before reaching a junction with another lane. Turn right for 250 yards to visit the Commonwealth War Cemetery, where many German, New Zealand and British servicemen who died in the camp hospitals were buried, then re-trace your steps along the metalled lane past your exit onto it and after a short distance you will arrive at the German War Cemetery and Visitor Centre. It is here where, in 1967, the remains of all German servicemen who died in Britain in both wars were brought for re-burial - a total of 2143 from the first war an from the second. A silent and thought provoking place.

On leaving the German Cemetery turn left to continue on the metalled lane. This soon deteriorates to stone and, upon reaching a fork, keep left along the lower path then stay with the path as it bears round to the right by a waymark. After a further 250 yards you will reach a crossroads and turn right along a broader track and the Heart of England Way. Follow this for about half a mile keeping right at a fork to reach a junction with a road at Rifle Range Corner. Just before getting to the road turn 90 degrees left along a very broad, straight track.

Keep ahead at a Forestry Commission sign to the right of the Cadet H.Q. and ahead again as the track loops left to the rear of it. Ignore all side tracks and continue for some half a mile to arrive at the Second World War rifle butts. At least I believe they are second war although if I am wrong no doubt someone will correct me! Apparently they were in use until quite recently. We were fortunate to be alone on our visit here and found it to be enormously atmospheric. I could almost see the ghosts of troops lined up on the bank in front and hear the deafening noise of rifle fire.

Cross in front of the butts and turn right to take the track going away at the rear. After about a quarter of a mile you reach a broad forestry track and cross it directly into a pine wood. This leads down to a junction where you take the least obvious route straight across on a narrower path, which shortly brings you to a junction with another broad track. Cross that directly on a rising stony path though a fir plantation and, after a steady climb, go ahead at a crossroads to reach yet another crossroads after a further 250 yards. If you turn right here a short distance will bring you to the second of the Rifle Ranges. It is much larger than the first and extends fully the 250 yards parallel to the path between the two crossroads. This one originates from the Great War and, if you take a closer look it will be apparent that this end is rather better preserved than the other. Again an atmospheric and desolate place - I wonder how many soldiers of the first War put through their training here actually came back from the trenches?

Re-trace your steps to the last crossroads and turn right to continue on the track you were previously following. Where the trees end continue ahead on the track opposite which leads down into Sherbrook Valley. Ignore all side paths until you get down into the valley where you cross the brook via a footbridge and turn right at a junction with a broader path. This is a pretty area popular for family outings but do not carried away and miss your next direction after only a matter of 60 yards or so. Here there is a waymarked crossroads of paths where you continue more or less ahead on the Staffordshire Way along a rising track.

After a fairly stiff climb you reach a junction and turn right on a path, which will lead back to Coppice Hill car park. You can cut right to reach it without having to meet the driveway.

This walk is reproduced by kind permission of Roger Seedhouse and is featured in his excellent book "Walks through History in the Heart of England". Visit his website for more information and online purchase.

Guidebook describing 42 half-day and day walks in the limestone landscapes of Derbyshire's White Peak, part of the Peak District National Park. One of two volumes, this book covers the east of the region, with potential bases including Bakewell, Eyam, Castleton, Birchover, Matlock and Wirksworth.
More information