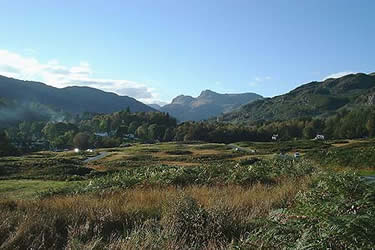 The Langdale Pikes are the most photographed and walked of Lakeland's mountains. This is because of their accessibility - towering above Langdale - and they also have a distinctive profile which invites exploration. Our first peak, Pavey Ark, holds the famous Jack's Rake. This is a grade 1 scramble (grade 3 being the highest) which gives walkers with a head for heights the chance to enter the preserve of the rock climber. There are no parts which can be said to be harder than many other bits of rock which you will meet on walks in the district but the whole rake is 250 yards long and rises at an average angle of 30 degrees with a maximum angle of 50 degrees. By the time you reach the top you will have ascended a 400 feet cliff and the "exposure" is noticeable at times. If you have a head for heights, are an experienced walker and are confident and competent - make your attempt in dry, still conditions and you should have a day to remember.

Note: There are two easier alternatives to Jack's Rake which are covered in this text and are illustrated in photograph 3 below.

To start this Lake District walk take the A593 Coniston road out of Ambleside and after 1.5 miles fork right onto the B5343 at Skelwith Bridge. Pass Elterwater and Chapel Stile and park in a car park on your left at New Dungeon Ghyll (GR NY295064). Parking is cheaper for less than 4 hours but it will probably take you longer to do the walk.

Cross the road and walk past the New Dungeon Ghyll hotel. Pass between the buildings at the top of the lane, through a gate and cross a small field to a gate in the far right hand corner. A path now leads up the right bank of Mill Gill - confusingly shown as Stickle Gill on many maps. The second peak on our walk, Harrison Stickle is prominent on the skyline. The gill drains Stickle Tarn and about three quarters of the way up the path fords the gill and follows the left bank steeply up to the tarn. Pause here to view the great cliff of Pavey Ark at the far side of the tarn and consider your options for ascent. The three options can be seen on picture 3 above - they are all reached by following the path anticlockwise round the tarn and are described below.

1. NORTH RAKE. A long "nose" of rock extends for some way to the right (east) of the cliff. A path round the nose leads to North Rake which starts its climb to the summit at GR288081. This is a boulder strewn path which reaches the top of Pavey Ark without difficulty.

2. EASY GULLY. A wide grass, mud and scree filled gully ascends the cliff to the right of centre and trends slightly right to join North Rake about half way up. A tricky boulder move (easier for long legged walkers) near the top makes this harder than North Rake. Reach the gully by a 100 foot climb on scree from the path round the tarn

3. JACK'S RAKE. This starts by the foot of Easy Gully and its ascent is described and illustrated below.

Jack's Rake is a distinct groove ascending to the left across the cliff. There is usually some wetness in the groove even in dry weather. Remember to test hand and footholds before you put weight on them and look carefully for signs of polished rock which indicate the route and you should have few problems. The first 75 yards (to an ash tree visible from the bottom) are the hardest part of the climb. Awkward chimney and bridging moves may be avoided by moving left and climbing the ribs which form a sort of parapet. This is often easier but much more exposed. After the ash tree the grooves become intermittent and are connected by a series of ledges which pose no difficulties. After the half way point the route makes a short climb up a gully before further ledges lead left to the final blocks and slabs. These are easier than the grooves below but feel more exposed. Fortunately, the rock here is excellent with good friction and good handholds. The route finishes up a slight gully leading up to a small plateau a short way down from the actual summit which lies to the east (right).

The next peak of Harrison Stickle is clearly visible to the south west and is reached by a path which contours the steep slope above Stickle Tarn. (Note: Wainwright "baggers" may wish to take a diversion north from Pavey Ark to include Thuncar Knott which will add a mile to the walk) Harrison Stickle gives good views back over Pavey Ark and west to our next objective, Pike o' Stickle, which appears as a rounded "sugar loaf" less than a mile away with Bowfell as a background. Leave Harrison Stickle by a slight gully west of the summit which descends north for 50 yards or so before turning west and dropping down to stepping stones (GR279074) crossing a marshy area. Note the position of these stepping stones as you will cross them again on the descent. A good path leads to Pike o' Stickle which is climbed by an anticlockwise traverse path and then a short vertical climb over rock to the small summit. This is one of the best viewpoints in the Lakes with good views over the head of Langdale towards Scafell Pike in the distance. Much closer to the east is our final peak of Loft Crag with the climbing cliff of Gimmer Crag below it. Between Pike o' Stickle and Loft Crag is the top of a huge scree shute dropping into Langdale. This is the site of a stone age axe factory and axes are still found from time to time.

Descend Pike o' Stickle by the path you used in ascent then pass the scree shute before taking a path which forks to the right and leads to the summit of Loft Crag after half a mile. Loft Crag has similar views to the previous summit but with views more towards the foot of Langdale. Now descend to the stepping stones (GR279074) again and once you have re-crossed them turn right to follow a narrow path traversing steep ground between the crags of Harrison Stickle and the upper gorge of Dungeon Ghyll. After a short while the path leaves the crags behind and leads down a wide fellside before skirting to the right of the minor peak of Pike How and descending through bracken to the buildings surrounding the New Dungeon Ghyll hotel.

Part of the Walking the Lake District Fells series, this guidebook covers a wide range of routes to 35 Lakeland summits that can be climbed from Ambleside, Grasmere and Patterdale and the Thirlmere and Ullswater valleys, with highlights including Helvellyn and Fairfield. Suggestions for longer ridge routes are also included.
More information

This guidebook describes 30 graded fell walks on the ridges and high peaks of the English Lake District, the UK's most popular national park. Reaching some of England's finest and highest mountain scenery, this guide leads readers to classic horseshoes and traditional ascents as well as lesser-known routes to quieter summits.
More information