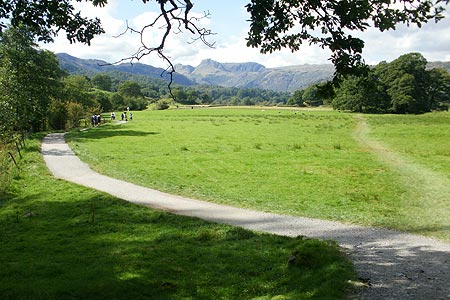 This Lake District walk has been named an 'Elterwater circular' in the sense of a walk that starts and finishes at Elterwater village, rather than a circuit of the lake of the same name which would be logistically challenging, given its indented, tree-clad shorelines although public footpaths do offer a possible circular route which goes around the lake without following its shoreline.

This is a walk suitable for a day when the tops are in cloud or simply for people who prefer a walk that is mostly on the level with a few gradients, mostly gentle ones. In places, the route involves walking along secondary roads where care needs to be taken with occasional traffic. The walk includes a visit to the lake of Elter Water and Loughrigg Tarn. This may raise the question of what the difference is between a tarn and a lake and various authors of Lakeland books have attempted to answer this question. While a lake is generally larger than a tarn this is not always the case, for example, Devoke Water, the largest tarn in the Lake District is larger than Rydal Water, a lake. If you were to list all the bodies of water in the Lake District by size, then as a general "rule of thumb", your typical lake is much larger in surface area than any tarn. Elter Water is one of the smaller lakes in the Lake District and an exception to that "rule". Elter Water is also a shallow lake with a maximum depth of only twenty feet whereas, by contrast, Loughrigg Tarn is almost twice as deep at thirty nine feet.

There is a large maple tree outside the Britannia Inn where the walk starts. Follow the Cumbria Way at a left turn just before the bridge over the river. Next, follow the path due south with the river on the right and fields on the left and enter Rob Rash Woods. The lake of Elter Water remains elusively hidden behind trees, until the path emerges from the woods and the view opens out to the right with the lake clearly in view, backed by the Langdale Pikes with Lingmoor Fell on the left. Follow the path ahead, initially across an open field with the River Brathay on the right, then through a gate into woods. The impressive water feature of Skelwith Force soon appears on the right, a rushing waterfall which can be seen from closer to by way of a narrow path leading to a viewing platform. To continue the walk, return to the main path to the small village of Skelwith Bridge where there is a café and a shop (Chesters by the River).

Next cross the A593, the busy main road coming in from the Ambleside direction, and walk up Foul Step, a narrow secondary road ahead that leads to Grasmere which is steep to begin with. After the gradient levels out, take a right turn where the road branches, and then follow a path to the left past houses and along the public bridleway ahead as Loughrigg Tarn comes into view. The Langdale Pikes, one of the most familiar Lakeland mountain profiles, dominate the backdrop to the tarn. Beyond the tarn, the bridleway joins up with a secondary road at a T junction. Turn right here and then take the next path on the left which winds its way up through woodland to Langdale Youth Hostel at High Close. Beyond the hostel, follow the secondary road coming in from Grasmere to the north east past Walthwaite Bottom and back down the hill to the village.