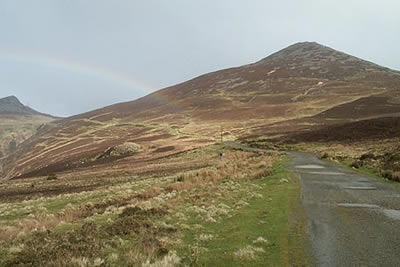 Rising to 564 metres above sea level the trio of hills known as the Rivals offer rugged walking and great views. Located on the Lleyn Peninsula in North Wales they are easily seen from Anglesey and the major mountains of northwestern Snowdonia perhaps offering an alternative if the high mountains are covered in cloud. Despite some scars left by quarrying activity the Rivals are full of interest especially with the partly restored Tre'r Ceiri Hill Fort atop one of the summits. Despite the short distance of the walk, remember there is considerable ascent to be done and the terrain is hard going in places with large rocks submerged in knee deep heather.

The start is the car park (grid ref. SH353440) reached by turning north in the village of Llithfaen on the B4417 Trefor to Nefyn road. From the parking two of the summits are visible but the third with its hill fort remains hidden until well into the walk. Leaving the car park head south east alongside the stone wall keeping it on your right. The path climbs gently before descending again into a broad valley.

Ahead lies the first objective, the attractive rocky outcrop of Caergribin (grid ref. SH367440) and for the most part the path is clear especially as far as the ladder stile. Reaching the rocky outcrop you are rewarded with some good views, especially to the south and west, and your first sight of the hill topped by the Tre'r Ceiri hill fort which will be visited next.

Descend from Caergribin on a clear path heading north-east. You soon join the main path as it heads for a ladder stile that takes you over a stone wall (grid ref. SH369443). From this point a well maintained path leads you up to the Hill Fort, which is superb with much restoration work and informative notice boards helping you to realise the scope of this massive fortification. It is also easy to understand the strategic nature of the location with first class views in all directions making it difficult for the enemy to launch a surprise attack.

After inspecting the fort return to the wall and cross the stile. Turn right and follow the path, which is feint in places, that climbs alongside the wall towards the summit of Yr Eifl. This is the highest of the three hills with a spectacular view down to the sea, nearly two thousand feet below you. The highest point is marked by a triangulation column. Descend southwest from the summit on a clear path that leads you back to the starting point.

Nigel Horrocks notes that "on a clear day, an alternative route to Yr Eifl, instead of returning to the ladder stile is: from the fort's main tourist entrance, walk the anti-clockwise path around the inside of the fort's walls until you reach the major breech on the western side of the wall which is another major entrance to the fort. When you walk through this entrance you will be looking directly at Yr Eifl, almost due west of where you are standing. Facing Yr Eifl, a few metres to your right, is a distinct path which traverses towards Yr Eifl and then becomes marked with discreet yellow paint marks on the rocks as the path weaves its way up through the rocks towards the summit. However this alternative could be a bit dodgy in mist or cloud."

In 1956, a large part of the Llŷn Peninsula was designated an Area of Outstanding Natural Beauty under the National Parks and Access to the Countryside Act 1949. It is one of only five such areas in Wales. The logo for the AONB shows a Chough as this bird favours the peninsula's rocky coastline where there are around 60 nesting pairs. The Llŷn Peninsula AONB covers 155 square kilometres with approximately 70% of the area's population speaking Welsh. More Information