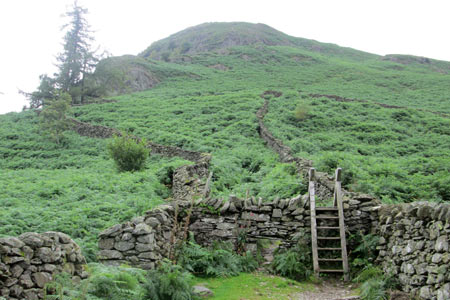 This is one of Lake District's best-known and most popular horseshoe walks which normally uses Ambleside and Rydal as the start and finish points in an anti-clockwise direction. This route goes the other way round and offers further variation by using the unlikely location of High Close as the start and finish point. There is a small area of off-road parking at the road junction with the road leading to Grasmere village at the top of Red Bank. This alternative approach means that you have the "balcony" view overlooking Grasmere lake and village from Loughrigg Terrace in the initial stages, after passing through Deer Bolts Wood, then a walk alongside Rydal Water to Rydal Hall with Nab Scar overlooking the small lake; a view seen in reverse to dramatic effect later after the initial steep climb up Nab Scar, the steepest uphill stretch of the whole route. When you eventually reach Ambleside, the route is completed by going over Loughrigg Fell. From the horseshoe, in clear weather, views are far and wide including lakes such as Windermere, Coniston Water, and Rydal Water and many of the Lakeland peaks.

From the steep road leading past Rydal Hall, a track leads off to Nab Scar up through bracken and much of the path is structured with rocks underfoot. As height is gained, the views open out, particularly looking across to Loughrigg and down on Ambleside. The path reaches a point where the gradient eases off and it switches to the left to reveal a birds-eye view looking down on Rydal Water with its five tree-clad islands of different shapes and sizes.

Between here and Fairfield, the undulating grassy ridge passes over three more tops of increasing height. As the late Alfred Wainwright observed in one of his illustrated guide books, Heron Pike (2,003 feet) doesn't look like a pike and herons will not be found there. From looking at the map, the name Erne Crag may well refer to the craggy outcrop on the eastern side of the ridge rather than the next highest point on the ridge, but there is no mistaking the graceful curving ridge of the next top, Great Rigg, a point where a path off to the left offers an option to shorten the walk back down to Grasmere via Stone Arthur, appearing diminutively below from here in contrast to its lofty appearance when seen from Grasmere village.

From Great Rigg (2,513 feet), it's another mile of easy ridge walking to Fairfield, the highest peak on the route (2,863 feet). A path leads invitingly due north past Fairfield which is OK if intending to go on to Cofa Pike and St Sunday Crag, but to continue the horseshoe you need to head east instead. The summit plateau of Fairfield is a confusing place to be caught out in mist, especially without navigational aids and it would be very easy in such circumstances to come down off the wrong ridge in error since there is a lack of clear landmarks and one direction looks much like any other. In clear weather, the way ahead is obvious as the Fairfield plateau leads down to a dip before the route climbs again to the dome shape of Hart Crag. Three further and progressively lower tops follow - Dove Crag, High Pike and Low Pike with the terrain generally getting less steep and easier the further you go but peat hags and boggy areas are still fairly frequent. A dry stone wall at High Pike could be a useful navigational aid in cloud. Even after Low Pike there is still a lot of altitude to lose but views are seen back along the ridge towards High Pike and across to the other side of the horseshoe while the grey slate roof tops of Ambleside are seen below backed by the northern basin of Windermere.

Although the normal approach to the Fairfield Horseshoe from Ambleside goes via High Sweden Bridge, there is no need to go back that way this time. Instead, by following the ridge down with ever-decreasing height loss as you pass over Low and High Brock Crags, Low Sweden Bridge is reached and crossed, leading into the village of Ambleside via Nook Lane. At the village, the most direct route to continue is by passing through Rothay Park to Under Loughrigg, then a steep road leads up the hill via Miller Brow to cross Loughrigg Fell, skirting Ivy Crag and leading to and beyond Loughrigg Tarn to reach a minor road which leads past Intake Wood and back to the start point.

Note: An option for shortening the walk towards the end is, on descending the ridge from Low Brock Crags, instead of going down Nook Lane, to miss out Ambleside and turn right instead on the approach to Low Sweden Bridge and then across Rydal Park and back to Red Bank from Rydal Hall.

Part of the Walking the Lake District Fells series, this guidebook covers a wide range of routes to 35 Lakeland summits that can be climbed from Ambleside, Grasmere and Patterdale and the Thirlmere and Ullswater valleys, with highlights including Helvellyn and Fairfield. Suggestions for longer ridge routes are also included.
More information