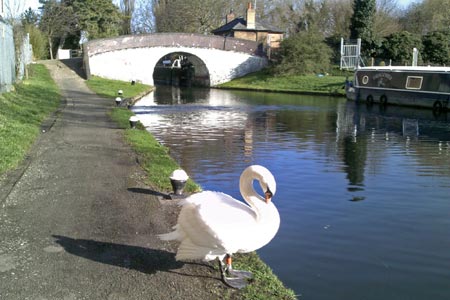 Sections of the Colne Valley Trail and the Hillingdon Trail combine to form this mainly linear route using two different London Underground stations to start and finish, Uxbridge and Ruislip. The first few miles mostly follow a towing path by the Grand Union Canal that dates back to the industrial revolution of the 18th and 19th centuries. On a sunny, still day, some of the reflections of trees, buildings and houseboats appear as if in a mirror. If it starts to feel like "canal overkill", the second part of the walk offers some different scenery as the Hillingdon Trail, although returning briefly to pass alongside the canal, leads away from it. The route now includes some gentle uphill sections with a variety of scenery including woodland, fields, a few ponds and the lake at Ruislip Lido with its many mute swans. Some of the swans may look like they just need an obliging person to open the main door of the waterside pub to go inside!

Emerging from Uxbridge railway station directly on to the High Street, go straight ahead and down Windsor Street. Turn right at the end of this road and continue beyond the roundabout to reach Oxford Road which in turn leads to the canal. Turn right to reach the towing path. The route ahead crosses the canal via a couple of footbridges, switching first to the right at Uxbridge Lock after about half a mile, and then left just after the A40. The route passes Denham Country Park on the left though it is not seen from the canal because of woodland. If you want to make this a "there and back" slight digression before continuing with the main route, the path leading to it in a third of a mile is just before Denham Deep Lock (shown as Denham Lock on the Outdoor Leisure Map 172). The lock is indeed deep, therefore it is well named. Various barges and locks are seen en-route and the occasional mute swans and mallard ducks. In the case of the latter, the female is speckled brown while the male has a green and black head and they can frequently be seen in pairs.

At Broadwater Lake, an alternative lakeside track runs more or less parallel to the canal for a few hundred yards, enabling glimpses between trees of a few distant islands on the lake to the left. A much better view of the lake comes later on in the walk on the Hillingdon Trail which gains some height to enable a view overlooking the lake.

Black Jack's Lock marks a point which the route returns to later on, but for now it continues to head north past the Coy Carp Inn, Lynsters Lake and a sewage treatment works to reach Springwell Lake and Springwell Lock just short of Stockers Lake. The Colne Valley Trail continues on to Rickmansworth but this route leaves it at this juncture. A noticeboard next to a small car park explains about an hour long circular route that can be done from here, and another one provides details of the 20 mile long Hillingdon Trail (HT).

Cross the bridge over the river and this is now the waymarked HT which at this point overlaps with part of the Colne Valley Trail. A series of signs for the HT generally acts as a reliable guide, at points of possible indecision, all the way to Ruislip Lido, normally in the form of an oblong horizontal metal brown sign with "Hillingdon Trail" in white capital letters, though occasionally fingerposts with the letters "HT" in white on them, particularly in woodland towards the end of the walk. Near to Black Jack's Inn, in February 2014, signs of the recent heavy rains and floods were apparent in the form of a tennis net appearing above the water level of a flooded area. At the Inn, cross a bridge over the canal and follow the road ahead. More generally, the landscape view from here shows that the Colne Valley is not as flat as it might have appeared when walking alongside it earlier in the walk. Now it is revealed as having sloping hillsides either side with Maple Cross in view and the busy M25 in the distance.

A sharp right turn at Hill End with allotments initially on the right leads back downhill through Park Wood towards the canal via a road, Bellevue Terrace. A left turn down Summerhouse Lane leads back to a bridge over the canal and back to Black Jack's Lock. As height is gained up a sloping field, one of the better views of the walk is revealed, overlooking Broadwater Lake beyond the canal with its various islands, a view that was enhanced by the sight of sunlight sparkling on the water. Some of the islands may appear to be no more than trees sticking out of the water, depending on the water level.

Once the houses and busy main road of Harefield have been left behind, the route assumes a more rural nature again and a few ponds are passed en route, amid woodland with trees seemingly growing out of muddy water. Occasional muddy stretches are encountered as the path leads through woodland and across fields. Breakspear Road North and Duck's Hill Road are crossed. The latter is easily the busier of the two but there is a pedestrian crossing with lights. At Copse Wood, there are different paths and the HT may be temporarily lost, but as long as the right general direction is followed, the 60-acre lake is duly reached, the next landmark of the walk. A car park offers ease of access to those who want to reach the lake by the easiest means and the many swans in the vicinity add visual appeal. The artificial sandy beach is seen on the far side of the lake from the waterside pub. The nearest tube station from here is Ruislip, about a mile away via Reservoir Road and a left turn into Bury Road leading to the High Street, though there is also the H13 bus that goes there about every 20 minutes.