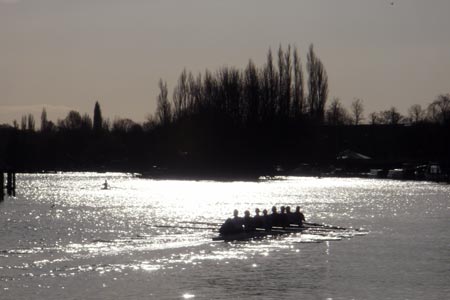 Henley-on-Thames may conjure up an image of a section of the River Thames with its rowing boats for which it is well-known, however, the landscape on this walk, while fitting that image briefly near the start and finish, is for the most part, quintessentially Chiltern. Therefore, walkers familiar with the Chilterns can expect a familiar mixture of sloping fields, low tree-clad ridges, narrow country lanes, hedgerows, isolated rural settlements and farms along with occasional muddy stretches of footpath. This is also red kite country and these birds of prey are seen gracefully gliding high above the tree tops with minimal wing movement and showing occasional glimpses of their distinctive red markings and V-shaped tails. These birds were once threatened with extinction in the UK. This route follows part of three long distance walking trails, the Oxfordshire, Chiltern and Shakespeare Ways. While the country lanes are generally quiet, it is advisable to be alert to the occasional approaching vehicle. Gradients are mostly gentle though there are a number of relatively steep sections, but none of them last for very long. The route outline is essentially a "there and back" between Henley-on-Thames and Middle Assendon and a circular route from the latter via Stonor.

The Oxfordshire Way starts at Bourton-on-the-Water in Gloucestershire and ends, near to where this walk begins, on the banks of the River Thames at Henley-on-Thames which has a car park near the river. The railway station is also conveniently near to the town centre and the river. Walk along the A4130, passing Marlow Road on the right and, in less than five minutes, a signed public footpath appears on the right. The muddy nature of the path at this point is likely to test the suitability of one's choice of footwear. The path heads up through woodland then up and across a grassy area named as "The Mount" on the map. It passes through the privately-owned Henley Park, though there is a public right of way. At Pond Cottage, an easy name to remember as there is a cottage with a pond outside it, cross a tarmac road and the path continues on the level between fields. There are a couple of wooden stiles to cross as the path goes through trees briefly before emerging into the open and the best view so far comes into view ahead as Middle Assendon is seen in the vale below amid a panorama of hills, fields, ridges and woodland. The path now goes down a grassy field and continues to lose height through woodland to reach Middle Assendon. Turn right alongside the main road before taking the next left turning along a country lane signposted "Bix Bottom".

The Oxfordshire Way continues, following country lanes via Little Bixbottom Farm. Turn right at the next T junction and follow the road ahead past the houses of Bix Bottom until a signed public footpath just past a house on the right, leaves the road and goes uphill past Freedom Wood. There is a fine view looking back from here towards Bix Bottom. Follow the path ahead through woods with the private Stonor Estate on the right, bearing right where the path forms a T. At Lodge Farm, it is time to join the Chiltern Way by following the sign posts for it past the farm. Just past the farm, the route takes a turn to the right which could easily be missed. A double path leads across a planted field and then becomes a signposted route through Park Wood where it loses height, and does so even more steeply on emerging on to a grassy hillside with the houses of Stonor now in view ahead

At the village of Stonor, the Chiltern Way follows the main road running through the village to continue on the other side of the road with the privately-owned Stonor House and deer park now on the left as the path ascends one of the steeper sections of the route before levelling out. After about a mile, after passing through Kildridge Wood, and just before reaching Southend, there is the muddiest section of the whole walk. Here there was evidence of recent tree-felling activity in February 2012. Just after this point, a crossroads is reached. Go straight ahead here and follow the path round to the right past a house on the left and climb over the wooden stile ahead. This is now part of the Shakespeare's Way. After passing a curious-looking hollow with trees both inside and on the edge of it on the left, a stile appears at the next hedge on the left marked with the Shakespeare's Way sign and the route continues with a hedge on the right down a sloping field to Gussett's Wood, due south. Go down through the wood, then up again at a crossroads of paths to emerge into the open across a field to a secondary road.

This is decision time as to which route to take back as one possibility from here is to walk down the road ahead due south and then take a path off through woods to the left. There are then different further route options to get back to Henley. However, this route turns right here along a narrow country lane, passing a turning for Kimble Farm on the right. Follow the road ahead to Coxlease Farm, where the road bends to the left and a public bridleway sign on the right indicates a way, past the farm, to a bridleway heading due south. The view across the vale to the right from here ranks as one of the better ones of the whole walk. The way ahead along the bridleway is obvious until you reach a point where the route appears to have come to rather an abrupt halt at a five-bar metal gate with cattle in the field ahead. Beyond the gate, the route continues next to a hedge on the right as it goes round to the right slightly downhill and you then need to cross a wooden stile. The path leaves the field at this point to continue down through woods, emerging into the open down a grassy slope to lead back to the road to Middle Assendon. Now reverse the outward part of the route back to the start point to conclude the walk.