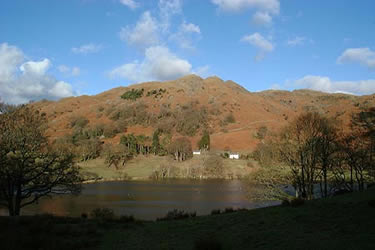 One of the lowest "Wainwrights" at only 1099 feet, Loughrigg is extremely popular because of its strategic position close to Ambleside, Rydal and Grasmere. Providing an excellent objective for Lake District walks, you can enjoy fine views and plenty of interest with this circuit taking in caves and lakeside walks as well as visiting the summit and exploring the summit plateau. Good level paths at the start of the walk mean that you may share the first part with mountain bikes, push chairs, babes in arms and teenagers in high heels! Do not despair, this is a magnificent walk and well worth braving the crowds for the first mile. (Note: If you wish to attempt the route near sunset or in mist then do it the other way round to the direction described here - as the best descent in poor visibility is down past the Grasmere Cairn to the end of Loughrigg Terrace.) The walk is very suitable for adults with young children as there is plenty to hold their interest. Before or after you do the walk take a drive round to the southern side of the fell to get the "chocolate box" view over Loughrigg Tarn (first picture below) from the minor road that skirts southern shore of the tarn (Grid ref. NY345043 )

The start - Just 100 yards out of Rydal on the A591 towards Ambleside, turn right onto the minor road at Pelter Bridge. After 10 yards turn right again over a cattle grid and drive 100 yards along the lane to a car park (Grid ref. NY366059).

Leave the car park and walk along the lane for a few hundred yards past cottages until the lane ends at a gate where the good level path alongside Rydal Water starts. Soon the path splits by a bench overlooking the lake. Take the higher path and proceed as far as a small bridge. (Note: If you look up the fellside to your left just before the bridge you will see the "Juniper Valley" which will be your descent route. As explained in the introduction, if you wish to do the route in reverse, this is where to start your ascent.) Our route passes over the bridge and after 100 yards you will reach the smaller of two quarry caves on your left. One hundred yards after the first cave, take a short detour up to the left to the "Great Cave." Stepping stones enable you to cross the pool and explore the cave. On exiting the cave turn left and rejoin the path. As the path leaves Rydal water behind, it joins the famous Loughrigg Terrace. This path has been a favourite viewpoint since Wordsworth's time and gives excellent views over Grasmere towards the Helvellyn Range, Dunmail Raise and the Easedale fells. At the far end of the terrace a small wooden bridge can be seen ahead leading into the woods at Red Bank. Just before the bridge turn sharp left to start the climb up the newly reconstructed path to the summit.

About half way to the summit is a huge cairn - the Grasmere Cairn. Up to the cairn the path has climbed steeply but from here onwards it is more undulating with hollows between rock steps. Finally, a crest is climbed and the summit, topped by a trig point, can be seen a few hundred yards away over a boggy depression. On a clear day the views from the summit are outstanding. To the north, the Easedale fells, Dunmail Raise and Skiddaw can be seen. The Helvellyn Range and the Fairfield Horseshoe can be seen to the northwest and, to the southwest, many of the Kentmere peaks are visible. South, over Windermere, is Morecambe Bay and, to the southwest, Wetherlam and the Coniston range dominate. To the West, the fells in view include Crinkle Crags, Bowfell, the Langdale Pikes and glimpses of the Scafells and Great End.

The summit pyramid is just one of scores of bumps on the large summit plateau which at first can make descents rather confusing - there are paths all over the place - going in all directions! First, take a short walk to the south to get a view of Loughrigg Tarn down below the south face. Then retrace your steps to pick up a grassy path heading in a broadly southeasterly direction. You will pass a maze of hollows, bumps and tarns. After about half a mile or so, at the spot marked as Black Mire on the OS 1:25,000 map, a broad marshy depression runs north - south across your track. Pick up one of several paths heading left (north) which will, after half a mile, drop down into a small valley with a few Holly trees and many Juniper bushes - some up to 12 feet high. Keep to the paths on the drier right (east) side of "Juniper Valley" (my own name) and you will soon rejoin the path on the shore of Rydal Water just east of the quarry caves. Turn right and head down the track to the carpark which is just a few hundred yards away.

Walking the Lake District Fells - Mardale and the Far East

Part of the Walking the Lake District Fells series, this guidebook covers a wide range of routes to 36 Lakeland summits that can be climbed from the Ullswater, Haweswater, Troutbeck, Kentmere and Longsleddale valleys, with highlights including High Street, Place Fell and the Kentmere fells. Suggestions for longer ridge routes are also included.
More information