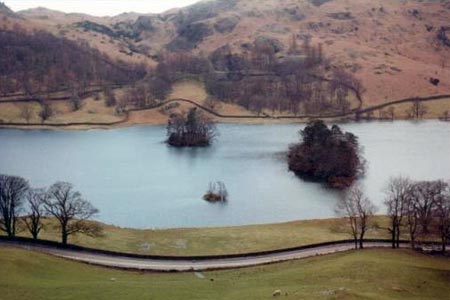 This Lake District walk explores the Rydal and Ambleside area of Lakeland and I have deliberately written this walk description with an emphasis on features of local historic and geographic interest. The walk mostly offers gentle gradients but there is one fairly steep pull up onto Loughrigg Fell from the south shore of Grasmere (lake). Two of Lakeland's smaller lakes are featured, Rydal Water and Grasmere.

From the centre of Ambleside, you pass the Bridge House over the River Rothay. The Bridge House is now an information centre on behalf of the National Trust. Originally it was built as a folly and the choice of location over the river was to avoid paying land tax. Historically, North Road used to be the main road north out of Ambleside rather than the present day busy Rydal Road where the Bridge House is situated. On the right, a dental practice now occupies the building which was, for many years, the location of the Ambleside Quaker Meeting House. Follow the main Rydal Road out of Ambleside, passing the University of Cumbria on the right, set back among grounds. Previously the University was known as St Martin's College and before that, the Charlotte Mason College, a teacher training college. In 2010 the University moved the teaching courses away from Ambleside to Lancaster, and the Charlotte Mason Building became the home of the outdoor studies lectures in Ambleside. Follow the A591 away from the village centre and, just past the housing estate on the right, a footpath on the right takes you away from the busy A591 main road and along an unsurfaced bridleway across Rydal Park with the Fairfield Horseshoe, and the steep slopes of Nab Scar in particular, prominently appearing to the right. Nab Scar is either the first or the last peak on a circuit of the Fairfield Horseshoe, depending which way round you do it. The track emerges at the hamlet of Rydal, location of Rydal Mount, best-known as the home of the famous poet, William Wordsworth and now a tourist attraction. Follow the old Corpse Road which traverses the lower slopes of Nab Scar and which offers a fine view of Rydal Water below to the left with its wooded islands. The lake is one of the smallest in the Lake District, being three quarters of a mile long and half a mile wide with a maximum depth of 55 feet.  The lake is backed by the hillside of Loughrigg Fell and a glimpse of Rydal Cave, a man-made quarry, can be seen, part way up the slopes of Loughrigg.

Emerging at the car park at White Moss, now cross the A591 and a path leads to a narrow wooden footbridge across the river that flows between the lakes of Rydal and Grasmere. Turn right here along by the river, the outflow of Grasmere, which comes into view ahead shortly. The lake of Grasmere is a mile long, half a mile wide and is about 75 feet in depth and it has one large island. The path goes to the left where there is a stony beach in the foreground and you can see the large island ahead with Helm Crag in the background and Silver Howe, another mountain, appearing on the left. There is a basic choice of two ways of completing the walk. A low level option is to follow the path alongside the shore of Rydal Water to the left and then back along the secondary road known as "under Loughrigg", then returning to the village through Rothay Park. This walk goes for the higher level route option, by following Loughrigg Terrace, a path along the side of Loughrigg overlooking the lake of Grasmere, a view that sometimes appears in post cards of the Lake District, indeed this is one of the better-known Lakeland views. The poet William Wordsworth lived in Grasmere village for fourteen years, describing it as "the loveliest spot that man hath ever found". From Loughrigg Terrace, a path goes uphill to the left, fairly steeply up Loughrigg and this is the part of the walk that involves the most height gain. Once the gradient eases off, the highest point of Loughrigg is soon reached, marked by a beacon. Although of modest height by Lakeland standards, (1,099 ft) bracken-covered Loughrigg offers fines views and features a number of rises and hollows. Loughrigg is criss-crossed by a number of sheep tracks through bracken and the aim now is to follow a path to the south east which joins up with the main track coming up from Miller Brow. Now follow the tarmac road, steeply in places, down past Brow Head Farm to join the "under Loughrigg" road running alongside the River Rothay which has its source at the Dunmail Raise above the village of Grasmere and it empties into the northern end of Lake Windermere. Rothay Bridge, a narrow humpback footbridge, is now on the left after passing a cattle grid, and the route continues over the bridge and back to Ambleside through Rothay Park.