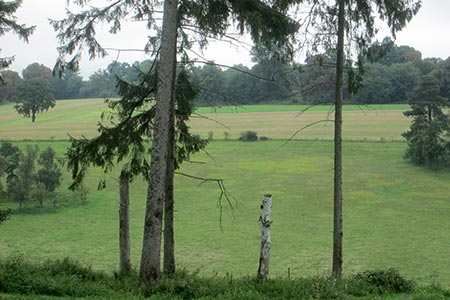 Henley on Thames is normally thought of as a riverside town and the location of the Henley Regatta. It is also on the edge of the Chilterns and is a starting point for several different countryside walks. Starting at Henley on Thames railway station, this route soon leaves the shops and streets to explore some secluded countryside to the west of the town. Deer may be seen in the distance as well as rabbits and squirrels. The route visits the small Oxfordshire village of Rotherfield Greys, before returning to Henley on Thames via a shallow valley. You could choose to end the route back at Henley on Thames but the optional extra of walking down to Shiplake is worth the effort not least because the stretch along by the River Thames is one of the more scenic parts of the walk.

From the station, bear right towards and alongside the river with the arches of Henley Bridge seen ahead. Follow the road due west from Henley Bridge as Market Place becomes Gravel Hill, and as the name suggests, the road is a hill, leading upwards out of the town, passing Friar Park on the right. Turn left down Pack and Prime Lane with a sign for a public bridleway to Rotherfield Peppard in three miles (grid ref. SU754826). The tarmac road and residential area is soon left behind as a public footpath path passes the private Henley College on the left and goes down through woodland. The path reaches a crossroads of paths and this is a point the route will return to later (grid ref. SU748824). Follow the path ahead through woodland where blackberries may be found in season and ivy spreads where it can, not just clinging to trees but appearing on the ground as well. There are occasional glimpses to the right of the shallow valley which the route will follow later on the way back.

After two miles, the route crosses a road (grid ref. SU732821) and a path continues across a field, passing a house on the left to reach Dog Lane (grid ref. SU728819). Turn left along the lane and at a crossroads of paths (grid ref. SU722819), turn right due north, along part of the Chiltern Way. Take the next signed public footpath on the right (grid ref. SU722821) across fields to reach Rotherfield Greys. The village has a pub, the Maltsters Arms on the left and the church of St Nicholas on the right. Cross the road and a path continues opposite the church across fields and traverses a gently sloping hillside to the foot of the shallow valley. Now follow this route back to the previously mentioned crossroads of paths and back to Henley on Thames.

Back at the river at Henley Bridge, follow the towing path of the Thames Path to the right. You will reach a point where the path along by the river appears to have come to an end with a road to the right (grid ref. SU772817) but here a wooden footbridge on the left, waymarked "Thames Path", continues the route towards and beyond Marsh Lock. Once the footbridge has been left behind, the route is less scenic, as it curves around a field alongside the river and then away from it to reach a tarmac road and, by following the road ahead, the route leads to Shiplake station and the end of the walk (ignore the turning for the Chiltern Way).

A guidebook to walking the Thames Path, a National Trail covering 180 miles between London's Thames Barrier and the river's source in Gloucestershire, passing through Windsor, Oxford and rural countryside. Provides full information for this easy riverside route that takes around two weeks to complete. Includes a 1:25K OS map booklet.
More information