Chilterns Walk
The Ridgeway at the End of the Chilterns 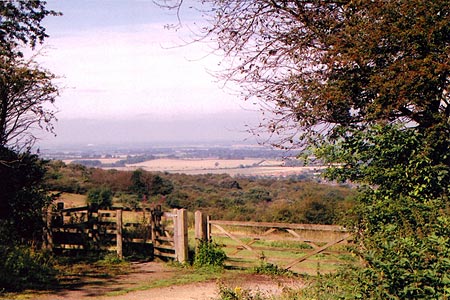 Leave the car park on the path starting between the information boards. It starts as a broad track through woods, but soon crosses over a track by an NT sign and onto down land, rich in plants including orchids and butterflies; you are almost certain to see red kite which are now common in this area. As you descend look out for a white scar in the turf; apparently this was dug out of the turf by an 18th Century Squire to improve the view from his house by creating a trompe d'oeil spire for the parish church. The track remains clear as it descends slowly with views over Watlington and Oxfordshire (which appears to be a remarkably flat County). When the path starts to descend more rapidly it bends right through a clear avenue between scrub with Watlington now more on the left. After going through a metal kissing gate the scrub becomes heavier until the road is reached. (Care!) Turn left for a few yards and then left again onto the Ridgeway.

You now follow the Ridgeway which runs more or less straight, more or less SW for some distance: after crossing the B480, it becomes a tarmac lane; at a tarmac T-junction it goes straight on as a bridleway, which soon becomes a green lane; where a track comes in from Britwell Salome it continues straight on to cross a lane and, still straight on, arrive at a farm where a sign post shows the Ridgeway turns left. It turns left again to bypass the farm buildings on the right, swings right and then goes straight on starting a gentle rise towards the woods ahead. On entering the woods the path turns right along the edge. Keep on the wide path still rising, ignoring an unmarked path on the right which leaves the woods, and soon after there is a reassuring Ridgeway acorn waymark. From here they are repeated quite regularly as the path continues due south over the brow of a rise and then down into an open bottom. (Over to the right there is a distant view of the cooling towers of Didcot power station, more or less constantly in view, if one walks the Ridgeway from north to south, from near Wendover until they are passed.) At the top of the rise from the bottom, one emerges onto a junction of lanes. Go straight ahead toward the 11th Century church of St Botolphs, Swyncombe. Pass the church, turn left and swing right down a track between an avenue of trees. Parkland is on the left and at the end of this turn left and go up through woods. Emerging from the woods continue along a field edge, hedge left, then a green lane to a farm. Turn left through the farm buildings, then at a cross track just before Ewelme Park leave the Ridgeway by turning left. (Before doing so it is worth continuing a few yards further along the Ridgeway to take a peep at the magnificent 20th Century Arts and Crafts house which now sits in the Park which had its origins in the 14th Century as a Royal Deer Park.)

The track you have taken soon become the drive to the house. Something like a mile long it comes out onto a lane. Turn left. The lane as it enters woods becomes a track and just before gates and a lodge turn right to continue along the edge of woods. Again you come out to a lane; this time turn right to arrive at the village green of Cookley Green. Turn left, pass in front of cottages, go through a gate, pass Coates Farm to a lane junction. Follow the one opposite until, just before a farm, the bridle path turns right into the woods before continuing through woods in the same general direction. Keep to the left hand sunken path. It ceases to be a sunken path where it swings left but then becomes sunken once more as it descends fairly rapidly. Eventually there is a footpath to the right - footpath W11. Follow this path, somewhat overgrown and much disturbed by burrowing creatures, to the B480. Turn left. This is a road busier than one would wish and one needs to take care but the sight lines are good and it is only about 1/4 mile to the next footpath on the right. There is no obvious footpath sign and the gates contain a notice "Watlington Park Private Access". Do not be deterred by this. Go through the bridle gate to the right of the main gates and take the footpath on the left after the first cottage. (Here there is a footpath sign to confirm that you are where you should be.) This footpath, somewhat overgrown, improves as you pass through a pair of bridle gates and enter NT land. It leads up the side of Watlington Hill between woods and scrub straight onto the car park.